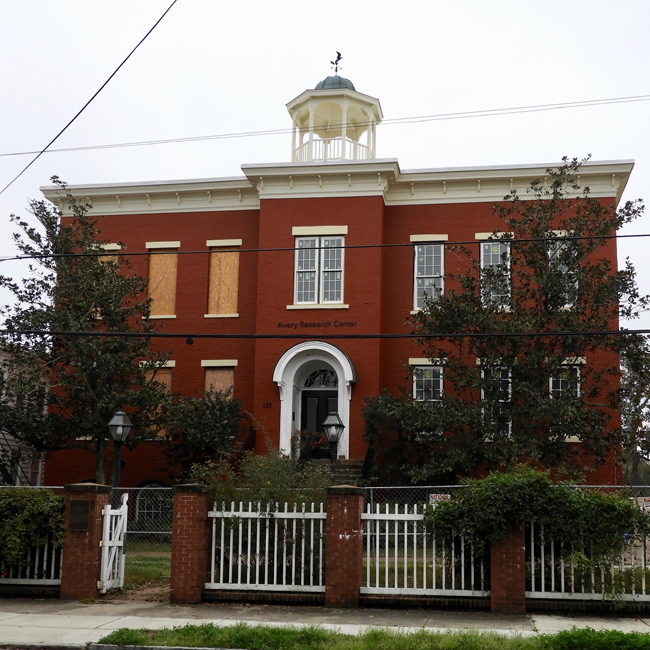 Written by Amelia Whaley. 18 March 2019 Posted in Diary of a Charleston Tour Guide

Returning to Bull Street, we stop at 125 Bull, an Italianate-style building built after the Civil War. Still an imposing building and topped by a cupola, 125 Bull Street was completed by 1868 as Avery Normal Institute, an institution integral to the much later Civil Rights movement in South Carolina and beyond.

At the end of the Civil War, the Union kept soldiers in Charleston until 1880, primarily to ensure that the free blacks received fair treatment; 1865 to 1880 is known as the “Reconstruction Era”. Unfortunately, when the Union soldiers left, many whites reverted to old mindsets and prejudices and, in many ways attempted to “enslave” the free blacks again, only this time by using segregation and closed doors of opportunity.

However, those 15 years while the Union forces were stationed in Charleston allowed time for important foundations to be laid. For instance, the Freedman’s Bank was established, the first bank with branches throughout the South. Additionally, the Freedman’s Bureau was established in 1865 right before the end of the Civil War and helped the free blacks with finances, medical help, housing and education.

Regarding education, the enslaved African Americans in the South did not know how to read or write because it had been illegal for them to learn and illegal for anyone to teach them. Education was critical, and the Avery Normal Institute was founded in 1865 as a private secondary school for African Americans. For the first few years Avery Institute was housed in various buildings; the lot and house at 125 Bull Street was built with financial help from the Freedman’s Bureau and another $10,000 from the estate of Charles Avery, a New York philanthropist.

Others instrumental in Avery’s founding and subsequent success were the American Missionary Association and two Charleston brothers, Thomas and Francis Cardozo, educated free blacks from before the Civil War. Francis Cardozo is responsible for adding an additional component to Avery Institute, that of training teachers.

Septima Clark, famous female icon of the Charleston Civil Rights movement and an early member of the NAACP (National Association for the Advancement of Colored People), graduated as a teacher from the Avery Institute; she taught on Johns Island because black teachers were prohibited from teaching in the city of Charleston at that time.

Avery became a public school in 1947 and closed in 1954, but the spirit of Avery continues. Avery graduates led the way to save 125 Bull Street and formed a nonprofit organization, Avery Institute of Afro-American History and Culture in 1978. This organization later partnered with the College of Charleston to form the Avery Research Center for African American History and Culture, continuing to educate students and the greater Charleston community.