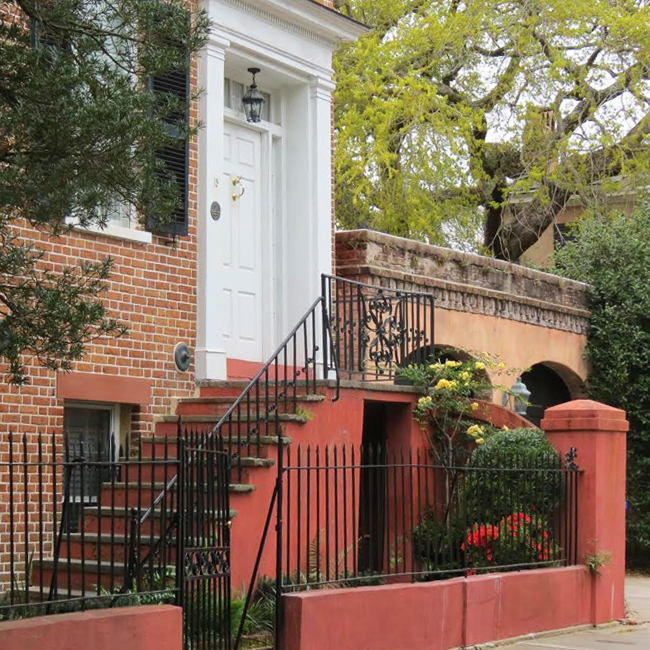 Written by Amelia Whaley. 30 July 2019 Posted in Diary of a Charleston Tour Guide

15 Church Street is part of the early 18 th century extension of Church Street after Vanderhorst Creek (now aptly named Water Street) was filled in. The property was originally owned by Captain Timothy Phillips of the Revolutionary War era, but the present house dates from 1842. The front of the property gives no indication of the size of this large property with dependency buildings.

15 Church was later the home of Amarinthia Yates Snowden and her husband, Dr. William Snowden. During the Civil War, the Snowdens used this house as a Confederate Hospital. Amarinthia was another in the long history of Charleston’s strong women, spending her life helping others; she is known for her philanthropic efforts in a time of turmoil and later devastation from the Civil War. Dr. Snowden died in 1863, and in 1864 when Union shelling from Charleston harbor hit the property, Amarinthia and her family buried their silver in the back yard and left Charleston for Columbia, S.C.

Amarinthia returned to Charleston in 1865, continuing to work with the poor and wounded; she also worked to have Confederate dead, hastily buried at various battlegrounds, exhumed and returned home for proper burial. One of the most important and lasting acts of philanthropy concerned destitute Southern females whose husbands, fathers, brothers and sons were killed or wounded in the Civil War. It was at 15 Church Street that Amarinthia and her sister Isabel held meetings to create The Confederate Home and College, which later becomes the “Home for the Mothers, Widows, and Daughters of Confederate Soldiers” located at 60-64 Broad Street. To this day, the Confederate Home continues to provide safe and affordable housing for older women.

The first time I ever entered 15 Church Street was as a docent for a house tour over 30 years ago, and that night I met a family that continues to embody the hospitality of Charleston and passion for the care and preservation of historic properties here. Dr. Simmons, who grew up at 15 Church, now lives here with his wife where they enjoy hosting a bed and breakfast in the heart of historic Charleston.