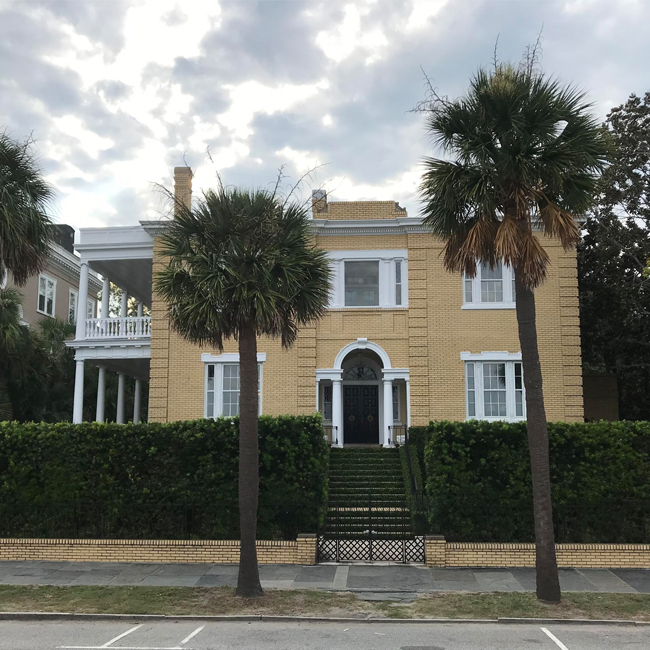 Written by Amelia Whaley. 13 August 2019 Posted in Diary of a Charleston Tour Guide

19 East Battery is the newest house on this historic strip, turning 99 years old this year. This double house constructed of brick on a raised basement with a double side piazza was designed in 1920 by Albert Simons, a native and famous architect son of Charleston. With almost 7,000 square feet, “the gold house” as it is often referred to, is an early 20 th century Charleston mansion.

While the house is not that old by Charleston standards, the site is steeped in our city’s history. The lot held several early fortifications, starting with the construction of Lyttleton’s Bastion in 1757 due to the French and Indian War. During the American Revolution, Lyttleton’s Bastion became Darrell’s Battery. After the Revolution, our new nation was continually tested by sea, and the new United States began to shore up defenses on the east coast of the country. In 1794 Fort Mechanic was built on this site in preparation for a French attack which fortunately never materialized; the wood of Fort Mechanic was replaced with masonry in 1809. Around 1818, the fort was destroyed and the property became private land.

The lot was sold to Elizabeth Holmes, wife of John Bee Holmes, a planter, attorney and the seventh intendant or mayor of Charleston. The Holmes built a grand four-story mansion on this site and the family held it for almost one hundred years. After the 1911 hurricane, the badly-damaged house was demolished.

The 1920 yellow brick mansion you see today was built by a prosperous haberdasher, Julius Marion Visanska. With its breathtaking view of Charleston’s harbor, 19 East Battery sold in March of 2019 for $5.7 million, a real steal with all the history attached to the property!