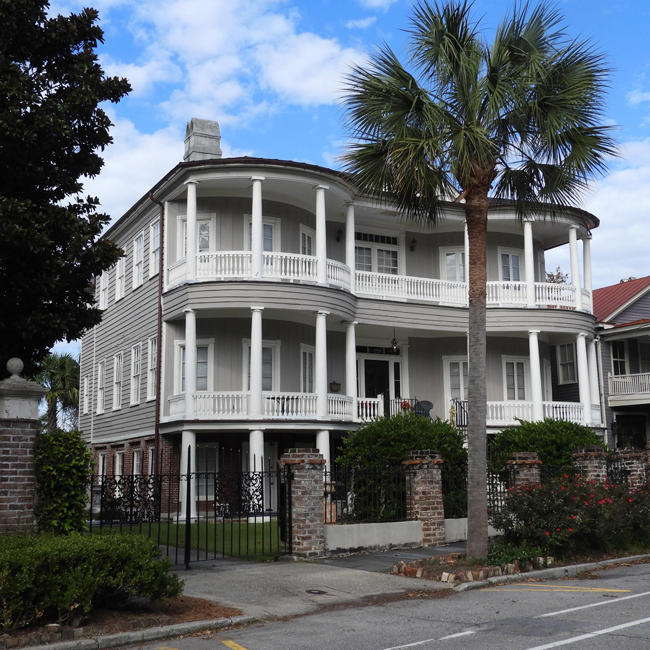 Written by Amelia Whaley. 19 November 2018 Posted in Diary of a Charleston Tour Guide

This week we visit 34 Chapel Street constructed in 1840 using elements of both the Greek Revival and Gothic Revival styles. 34 Chapel is 6,500 square feet and rises above its neighboring structures; the distinctive double bowed piazzas in front are part of what makes this house a “show stopper” on Chapel Street.

34 Chapel was built by a member of the Toomer family, either Dr. Anthony Vanderhorst Toomer or his son, Dr. Henry Vanderhorst Toomer. We met the Vanderhorsts (pronounced “Vandrost” or sometimes “Vandross”) several weeks earlier in the post regarding 28 Chapel Street. The Toomers settled in the Lowcountry in the 18 th century and several are mentioned for their service and bravery as patriots in the American Revolution, including Joshua Toomer whom Banastre Tarleton’s men led a search to capture but failed. Joshua Toomer married the daughter of William Vanderhorst who owned Richmond Plantation in Mount Pleasant. Their son, Anthony Vanderhorst Toomer became a physician; he was also a planter with extensive land holdings in Lowcountry including Richmond Plantation, which he inherited from his parents. Dr. Anthony Toomer owned various properties in Charleston, and he also owned a home in Rhode Island.

Dr. Anthony Toomer had built an earlier house at 36 Chapel Street, next door to 34 Chapel. 36 Chapel, dating from 1809, is a fine Federal style house with double piazzas. Today, however, the house is partially hidden behind foliage while the view of 34 Chapel is unobstructed and enhanced by the lone, tall palmetto tree in front.

Dr. Anthony Toomer’s son, another celebrated Charleston physician, Dr. Henry V. Toomer, lived with his family at 34 Chapel Street. Unfortunately, Dr. Henry Toomer died prematurely; he was treating those with yellow fever during Charleston’s 1858 Epidemic, became infected and died at the age of 45.