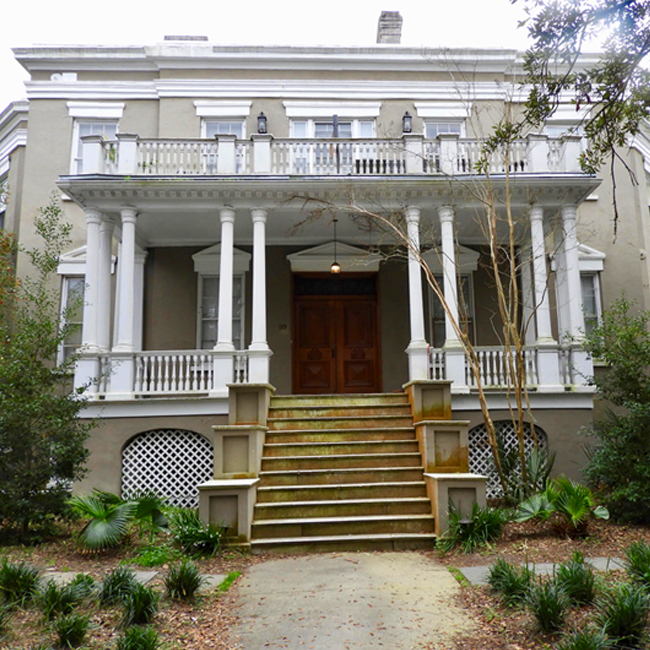 Written by Amelia Whaley. 04 March 2019 Posted in Diary of a Charleston Tour Guide

This week we'll travel to 99 Bull Street, built in 1854 and owned by a Charleston merchant, Frederick Richards. Francis Warrington Dawson, the founder of Charleston's Post and Courier newspaper, purchased the property in the 1870s, and he was living at 99 Bull when the earthquake of 1886 hit Charleston on August 31. The quake demolished the front portico; fortunately, Dawson was not at home but was working late at the newspaper's office, then on Broad Street.

Dawson had restoration and perhaps some style updates completed after the earthquake; the portico with fluted columns topped by the balustrade above together with the huge wooden doors provides a grand and imposing entrance. There are bays on either side of the house. Today, instead of a single family residence, 99 Bull consists of several apartments.

As founder and owner of the newspaper, Captain Dawson was involved in civic affairs, kept abreast of national and international news and communicated the same to his readers. He was a leader in the community and uniquely positioned to have a clear picture of the issues of the day, of which there were many. After the Civil War and during the Reconstruction era, the entire South was in a major, and frequently volatile, transition. Dawson used the paper, his "voice," to bring clarity to the situations surrounding Charleston and the South. I would imagine that Dawson was aware of the good, the bad, and the ugly in Charleston; it appears he did not hesitate to confront what came his way. That boldness led to his premature death.

In 1899, the murder of Captain Dawson laid bare a scandal of historic proportions in Charleston. Captain Dawson's wife employed a young Swiss woman to help with their children, and it appears that she was being stalked by Dawson's neighbor, Dr. Thomas McDow. When Dawson went to McDow's house to confront him, McDow picked up a gun and killed Dawson with one shot. McDow tried to bury the body, then unburied him before turning himself in to the police. The murder and later the trial shocked the city. By all accounts, McDow seems to have been a rather shady and unsavory character, much of which was not allowed in the court record and remained unknown to the jurors at the murder trial. The scandal was not only the murder, but the sordid details surrounding it. The greater scandal was the acquittal of McDow on all charges.