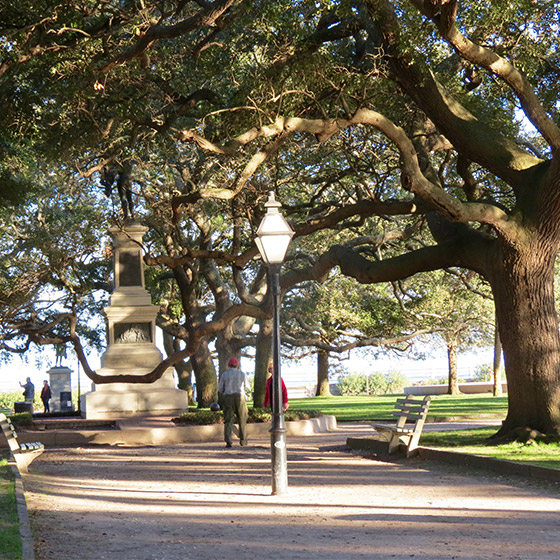 Written by Amelia Whaley. 23 March 2017 Posted in Diary of a Charleston Tour Guide

The first public park in Charleston, White Point Garden, existed long before my birth (the first part of the public park was created around 1837). Of course, growing up I never referred to the park as “White Point Garden”; to me, it was always “the Battery,” which included not just the park but also the raised seawall or “High Battery” and the connecting lower seawall on Murray Boulevard known as “Low Battery.”

In 1670, when the English ship “The Carolina” sailed into the harbor and up the Ashley River to what would become the first settlement of Charles Town, the tip of the peninsula was covered in white oyster shells and so was referred to for many years as either “Oyster Point” or “White Point.” Within 10 years, that early settlement moved across the Ashley to the peninsula. This decision proved to be wise, as this landscape made the young settlement easier to defend. For many years and through various wars, the tip of the peninsula was the site of fortifications, leading to the name “The Battery.” Even today, cannon and other military relics are placed around the perimeter of White Point Garden, and monuments to people who are important to Charleston’s history are scattered throughout.  Filled with live oaks and palmetto trees and beautifully maintained by the City, White Point Garden is simply one of the most enjoyable places that Charleston offers to both residents and visitors. Why?

3. The South Battery side affords a view of stately and historic homes from the pre-Revolutionary, Antebellum and Victorian periods.

4. On the East Battery side, High Battery is right across the street. From High Battery, enjoy a great view of Charleston Harbor where you can also see Sullivan’s Island, the tip of James Island, Fort Sumter and Castle Pinckney.

5. The Murray Boulevard side hosts the Low Battery walk (with people occasionally fishing over the rail), the Ashley River and a view of James Island.

I suggest you take a picnic lunch and spread out on the grounds – if surprised by a sudden shower, grab the goodies and take shelter in the Gazebo.  Then, to walk off lunch, stroll along the allées and study the monuments, head across the park to East Battery and up the double staircase to High Battery or walk Low Battery along Murray Boulevard.  Another option is to spread out on your blanket and take a nap.  (Please take note, however, that there are no public restrooms – in fact, the closest public restroom is probably City Hall at the corner of Broad and Meeting Streets.)

For me, the icing on the cake is when I run across a wedding at White Point Garden. This park is such a romantic setting that it’s become one of Charleston’s many “wedding destinations.”  It’s not unusual to see bridesmaids and groomsmen crossing South Battery on their way to a White Point Garden Wedding. There are even couples who marry elsewhere during the day and simply come here as a backdrop for their wedding photographs. In fact, I found these newlyweds at White Point Garden in mid-January and they kindly let me take a photograph to post in my “Diary” and share with you! 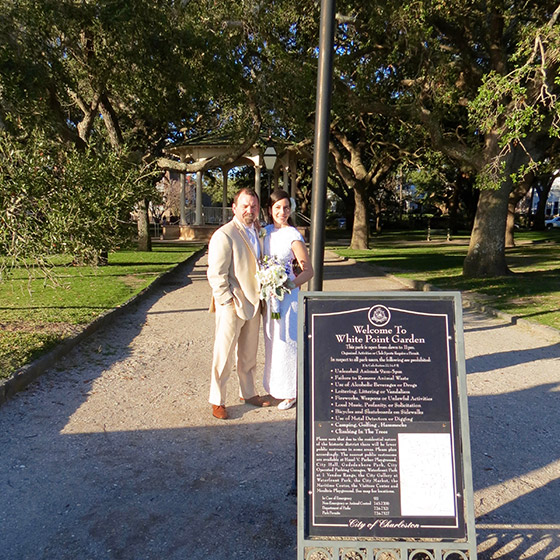