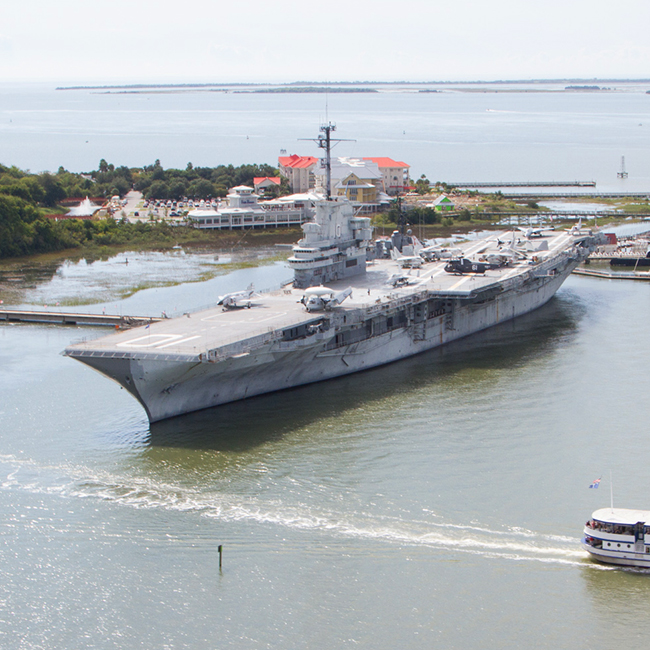 For history buffs and maritime aficionados, a Charleston vacation isn’t truly complete without a visit to Patriots Point Naval & Maritime Museum. Home to legendary World War II battleships such as the USS Yorktown, the museum is one of only two museums in the country that has more than two battleships, making it one of the most popular attractions in the Holy City.

Located in the top-rated city of Mount Pleasant on the beautiful Charleston Harbor, the museum offers visitors a chance to see Charleston’s magnificent monumental battleships up close and learn about the heroes aboard them. As the fourth largest naval museum in the country, you won’t be short on things to do at Patriots Point.

Docked at Patriots Point is the USS Yorktown, the 10 th aircraft carrier to serve in the U.S. Navy and one of only 24 Essex-class aircraft carriers built during World War II. Named after the Battle of Yorktown in the American Revolutionary War, the Yorktown has played a pivotal role in our country’s history.

A Brief History of the USS Yorktown

The USS Yorktown was built in just 16 ½ months—a short time for a battleship of its size. Commissioned on April 15, 1943, the “Fighting Lady,” as she was called, participated in the Pacific Offensive, which resulted in an Allied victory over Japan in 1945.

Her service in World War II earned the USS Yorktown the Presidential Unit Citation and 11 battle stars, but she wasn’t finished yet. In the 1950s, the Yorktown was used as an anti-submarine aircraft carrier and took part in the Vietnam War (1965-1968), for which she earned five battle stars.

In December 1968, the Yorktown would complete her final mission: recovering the Apollo 8 crew after a successful mission to the moon.

The USS Yorktown was decommissioned in 1970 and became a museum ship at Patriots Point five years later. Now a National Landmark, the USS Yorktown is nearly 75 years old and still attracts hundreds of thousands of people each year who wish to step aboard the legendary monumental battleship. 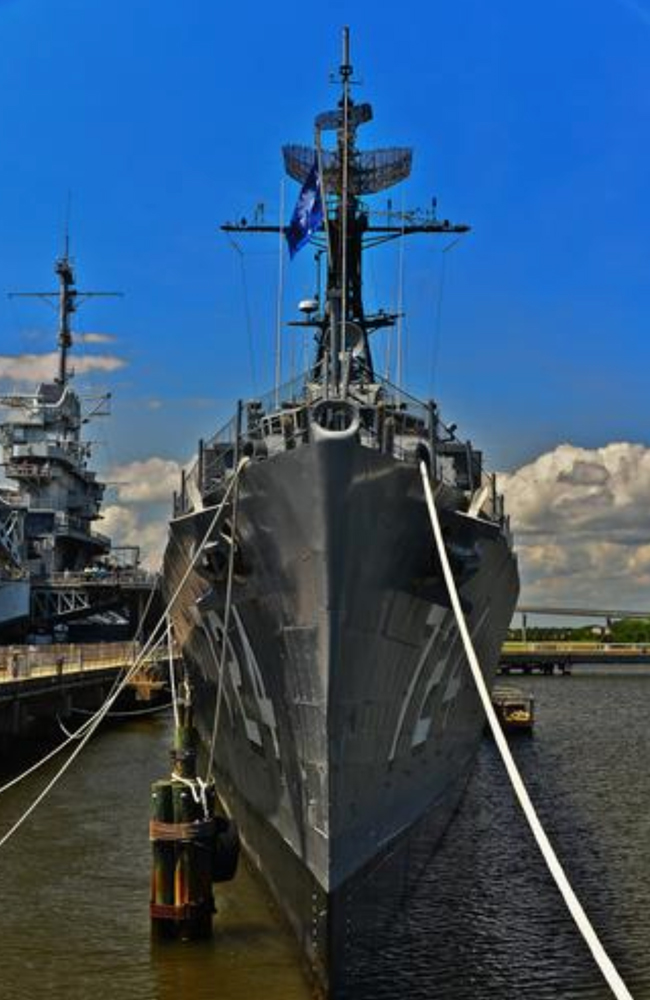 A Brief History of USS Laffey

On February 8, 1944, the USS Laffey was commissioned at Bath, Maine with Rear Admiral Frederick Becton in command. After initial training, the boat prepared for the invasion of Normandy, where the Sumner-class destroyer would support Allied forces in the fight against the Germans in June 1944.

In addition to surviving the tumultuous D-Day landings at Normandy, the USS Laffey also withstood multiple bombings from 22 Japanese Kamikaze planes and conventional bombers while operating off Okinawa in 1945. Fighting for 80 minutes, the ship managed to shoot down many incoming planes, but not without taking serious hits as well.

Seven suicide planes crashed into the USS Laffey, and two bombs hit the ship, killing 32 and wounding 71 of the 336-man crew. Still, the USS Laffey survived and earned her famous wartime name, “The Ship That Would Not Die.”

The ship’s service in World War II also resulted in the Presidential Unit Citation and five battle stars. After serving in the Korean War and braving mine-infested waters at Wonsan Harbor, the USS Laffey would earn two additional battle stars.

The USS Laffey was decommissioned in 1975 and designated a National Historic Landmark in 1986. Now docked at Patriot’s Point, she is a must-see for history lovers. 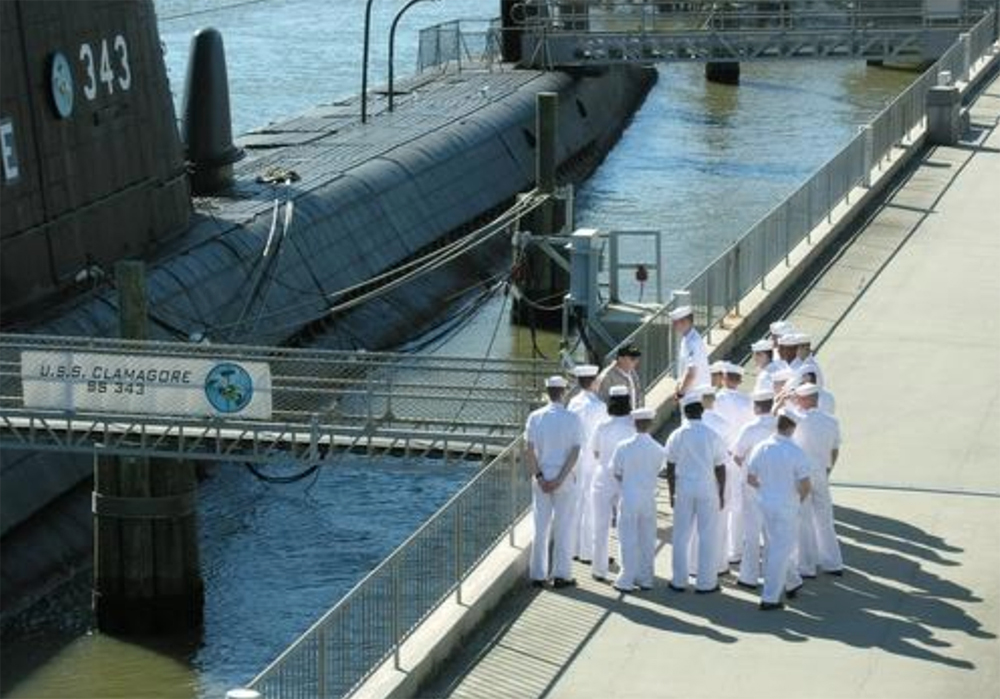 The USS Clamagore is an iconic Cold War Battleship that served for 30 years during the Cold War. She is the only GUPPY III submarine preserved in the United States.

The USS Clamagore was commissioned in June 1945 at the end of World War II. Built as a Baleo-class submarine by Electric Boat Division of General Dynamics Corporation, the Clamagore first operated off Key West, Florida under Commander S.C. Loomis, Jr.

After assuming numerous operations and tours, the USS Clamagore returned to Charleston in 1960. In 1948, she became one of only nine submarines to undergo GUPPY III conversion, an initiative by the U.S. Navy to improve her underwater performance. To clarify for those outside of the military, GUPPY is an acronym for the Greater Underwater Propulsion Power Program, with the “y” added for pronounceability.

During the conversion, the battleship was cut in half, and a new hull section was added. She received an impressive upgrade for a World War II-era submarine, with the latest fire control system and electronics installed.

The USS Clamagore was decommissioned in 1975 and was added to the Patriots Point Fleet in 1981. She was made a National Historic Landmark in 1989.

Unfortunately, the USS Clamagore suffers from serious structural fatigue, costing an estimated $6 million to repair. In January 2017, the museum signed a deal with Artificial Reefs International-Clamagore to sink the USS Clamagore in the ocean near Florida, making it an artificial reef.

The monumental battleships at the Patriots Point Naval & Maritime Museum are a must-see on your Charleston vacation. Steeped in history and heroism, these battleships have made significant impacts on the U.S. and the world. While you’re visiting the museum, be sure to carve out enough time to tour the many exciting exhibits, including the National Medal of Honor Museum and the Vietnam Exhibit.