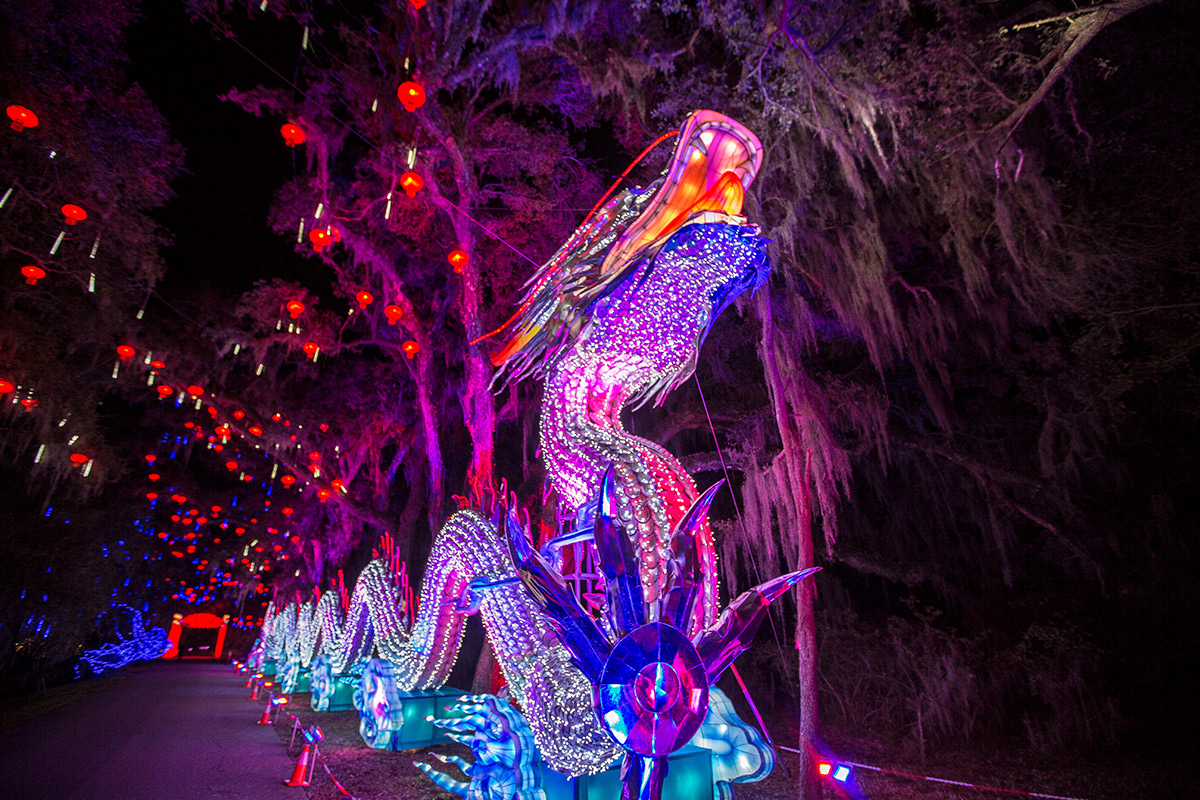 Also known as the Charleston Chinese Lantern Festival, Lights of Magnolia is a visual spectacle never seen before in this part of the world.

It’s described as a “massive garden installation of LED light exhibits,” put on in partnership with the world famous Zigong Lantern Group from Zigong, China.

According to their website, Zigong is the leading Chinese lantern festival in the world. They’ve won numerous international awards, are the largest in China and the biggest lantern festival operating outside of China as well.

Here is how they describe their work:
“Artisans build mgnificent lantern displays on-site, using a variety of materials including silk and chinaware. They then illuminate all of our lanterns with environmentally friendly and cost-effective LED lights. The famous pagoda is made of thousands of ceramic plates, spoons, saucers and cups knotted together by hand – always a visitor favorite.
Cultural Chinese lantern festivals began during the Han Dynasty of the Chinese Empire, when people believed that fire could ward off evil and bring blessings. The art of the lantern festival has evolved over centuries and is now a combination of traditional and modern materials with the ancient craft.”

Their installations are stunning works of art, and they are particularly beautiful on the famous grounds and gardens of Magnolia Plantation. Lights of Magnolia’s tagline is, “See America’s oldest public garden in a new light.”

Lights of Magnolia will cover 9 acres with 23 different themed lighted lantern displays. Here’s a cool video of them installing Lights of Magnolia, including a gigantic fire-breathing dragon whose scales are made up of lovely ceramic plates.

Where else have they been?

Here are some other locations where Chinese Lantern Festivals have transformed the environs with lanterns and light:

Lights of Magnolia will be open for walk-through tours, Wednesday through Sundays evenings, from 5:30 till 9:30. It will be at Magnolia through March 15th 2020. Food trucks will also be on site nightly

So check out a lovely lighted event in one of the most beautiful gardens in the country. And when you are looking for the best in luxury beach house rentals, be sure to give Exclusive Properties a call.

All best,
Lowcountry Lisa
your Isle of Palms vacation blogger