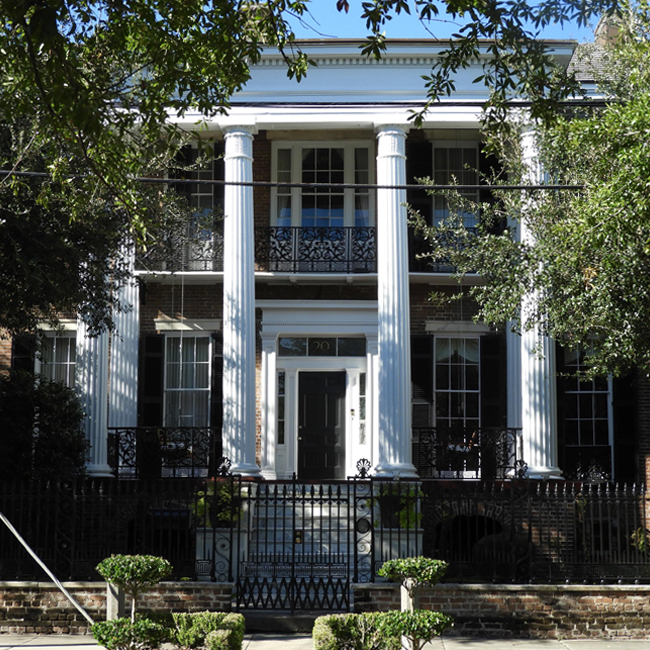 Written by Amelia Whaley. 29 October 2018 Posted in Diary of a Charleston Tour Guide

“Second cousin” means the child of your parent’s cousin. However, when you get to fourth cousins and beyond, people get confused. It is much easier to say either “a cousin, but not a close cousin” or, if pressed, “we share a third great-grandfather” (which many times brings the questioning to a halt). After all, everyone here is probably related; it’s just whether or not you claim each other…

Joseph Daniel Aiken was born in 1817 in Winnsboro and later came to Charleston to practice law; here he married Ellen Martin whose father built the newlyweds a home next door to his. 20 Charlotte is just as stylish as Robert Martin’s home, but looks quite different. While 20 Charlotte would be termed a Greek Revival house, it contains some unusual features.

An arched loggia on the west side of the house overlooks the patterned garden. The four fluted columns on the portico span both floors of the house; each column is topped with a variation of the Corinthian capital known as the “Tower of the Winds,” a capital used extensively in the Greek Revival style. We saw Tower of the Winds capitals months ago in the Diary Post on 138 Wentworth Street. These capitals normally have rows of acanthus leaves beneath a row of palm leaves. The name is taken from a structure in Athens, Greece known as the Tower of the Winds and built in the first century BC; the structure primarily served as an early version of a clock tower through the use of its sundials.

In addition to being an attorney, Joseph Aiken served as the First Lieutenant of the Ashley Dragoons during the Civil War; he also became a cotton factor or broker, and was an accomplished artist and sculptor. He and Ellen had four children; their son, William Aiken was an architect and designed buildings for the Federal government. Their other son, Joseph Aiken, lived in Winnsboro and amassed a fortune in the textile industry; although he did not attend the Citadel, he admired the military college and bequeathed The Citadel $750,000 at his death in 1953.

Next week we’ll continue exploring the Wraggborough district of Charleston.