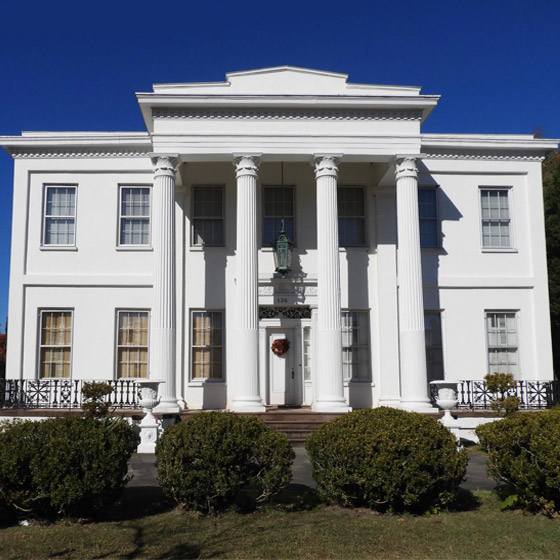 Written by Amelia Whaley. 10 January 2018 Posted in Diary of a Charleston Tour Guide

Set back from the stret on a huge lot, 138 Wentworth Street quietly stands in grandeur, bright white against the green lawn. Designed by architect Russell Warren of Rhode Island and completed in 1838, this Greek Revival mansion was built for Edwin Kerrison, a dry goods merchant.

The four fluted columns on the portico are each topped with a variation of the Corinthian capital known as the "Tower of the Winds" capital, which was used extensively in the Greek Revival style. Take a look at the photograph and you'll see that these capitals have a row of acanthus leaves below a row of palm leaves. The name is taken from a structure in Athens, Greece known as the Tower of the Winds, built in the first century BC. The structure primarily served as an early version of a clock tower through the use of its sundials.

Another interesting feature at 138 Wentworth is the 20th-century wrought-iron gate designed by the late Philip Simmons. Elegant in its design and scrollwork, this gate is a perfect enhancement to the property at 138 Wentworth. Simmons, who died in 2009, will always be known as a Charleston treasure. He was raised by his grandparents on Daniel Island until the age of 8 when he was sent to live with his mother in Downtown Charleston to attend public school. He found his passion as he passed by the blacksmith shops on upper Calhoun Street and apprenticed to one as soon as he could. As an adult, he purchased the business.

After the carriage trade was rendered obsolete by the rise of the automobile, Simmons repaired gates, window grilles, and other works of iron until he began forging and installing gates of his own design and sometimes the designs of his patrons. It is considered a privilege to have a property with ironwork by Mr. Simmons.

138 Wentworth Street became the home of the Episcopal Diocese of South Carolina in 1947. The property was sold in 1970, renovated, and returned to residential use.

The original owner of 138 Wentworth, Edwin Kerrison, founded a dry goods business with his brother in Charleston around 1831. The business later morphed into Kerrisons Department Store, a Charleston icon located on King Street that closed in the 1990s. Kerrisons was my go-to during high school for several reasons. (1) It was within walking distance of Ashley Hall where I was a boarding student, (2) my mother trusted the quality of its clothes and other goods, and (3) my parents had a charge account there (obviously the most important point for me).

Check back with me next week as we continue our look at the grand houses of the city.