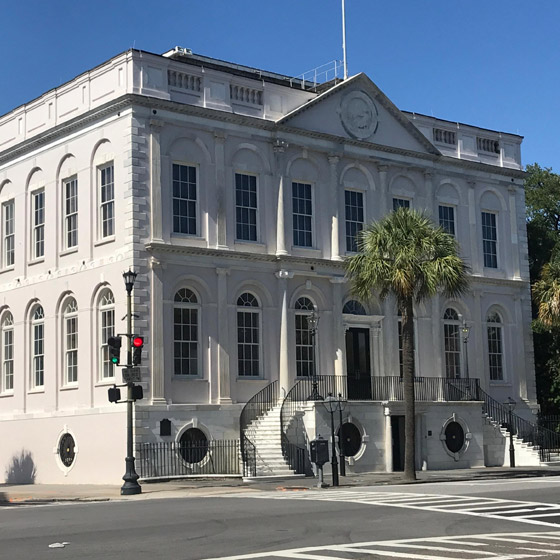 The Four Corners of Law: City Hall Part I

Written by Amelia Whaley. 23 April 2018 Posted in Diary of a Charleston Tour Guide

Over the next several weeks, we will concentrate on exploring the "Four Corners of Law" at the corners of Broad and Meeting Streets. Some things happen by accident but are meant to be - the Four Corners is one such example. The most important public square in Charleston evolved over two centuries, and no one recognized it as the Four Corners of Law until Robert Ripley of Ripley's Believe It or Not! visited Charleston in the first part of the twentieth century and immediately named the public square as such regarding City Hall (City Law), the State House (State Law), the Federal Post Office and Judiciary System (Federal Law) and St. Michael's Episcopal Church (God's Law).

The site on which City Hall sits at 80 Broad Street had been a beef market before it was destroyed by the 1796 fire. The present building on this site (a far cry from a beef market) was built between 1801 and 1804 as the Bank of the United States. The design of the original building is attributed to Gabriel Manigault, rice planter, attorney and Charleston's "gentleman architect," and later renovations involved other architects.

From 1811 to 1818, the State Bank of South Carolina had its Charleston branch at 80 Broad, and in 1818 the City acquired the property. City Hall has been at this address ever since.

City Hall is an impressive building with the City Seal shown in the center of the pediment. The Latin motto means "The Body Politic: She Guards Her Buildings, Customs and Laws." The facade speaks to the building's importance with columns showing the three Greek orders of architecture with Doric, Ionic and Corinthian capitals.

Tip for tourists: the first floor of City Hall can be a great escape from the heat or the rain. A film showing some of the history of City Hall continually loops during the day. There are also public restrooms available on the this ground floor that are currently open seven days a week (not open on holidays).

In Part II of City Hall, we'll explore the public spaces inside the building.