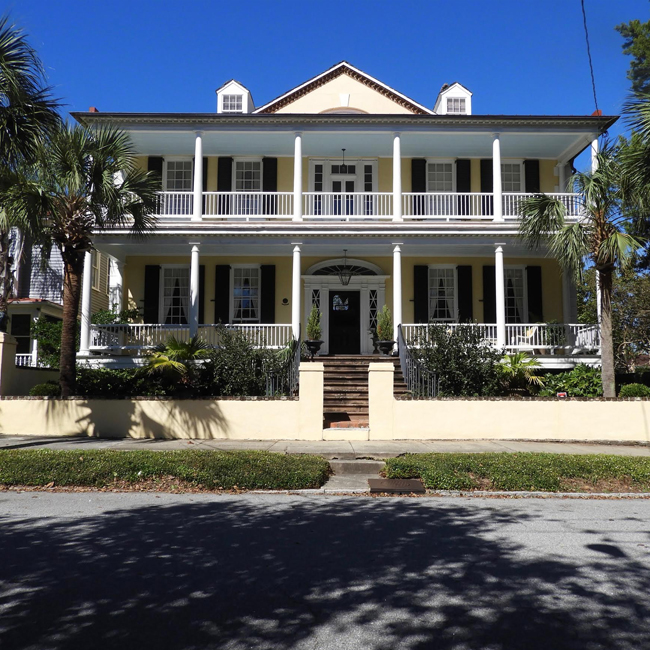 Written by Amelia Whaley. 12 November 2018 Posted in Diary of a Charleston Tour Guide

This week we visit 10 Judith Street, built in 1814 by John Robinson, the same merchant gentleman who six years later built the Aiken Rhett House at 48 Elizabeth Street. Mr. Robinson, as you may recall, ran into financial problems around 1827 and had to sell most of his properties. 10 Judith is one property Robinson kept; over 6,000 square feet with two and one-half stories over a raised basement, the house is brick covered in stucco with double piazzas topped with a pediment between two dormers. The iron staircase leads to a magnificent main door with a fanlight and sidelights. 10 Judith was a wise choice to keep.

A later resident of 10 Judith Street was an early bishop of the Reformed Episcopal Church. Peter Fayssoux Stevens is a fascinating Charlestonian. He was born in 1830 and graduated from the Citadel in 1849. Stevens married Mary Capers in 1853; she was the daughter of a Methodist bishop and the sister of an Episcopal bishop.

Stevens fought for the Confederacy during the Civil War. He was the commander of the unit of Citadel cadets who were stationed at Fort Johnson after South Carolina became the first state to secede from the Union on December 21, 1860. On December 26, 1860, Major Anderson and the soldiers stationed at Fort Moultrie on Sullivan's Island moved to Fort Sumter in the middle of the night. Soon, Major Anderson and his men found themselves in dire straits; the provisions they had brought with them to Fort Sumter were depleted. President Lincoln sent a ship, Star of the West, to resupply the troops at Fort Sumter. At Fort Johnson, Peter Fayssoux Stevens commanded the Citadel cadets to fire on the Star of the West, which then turned back. This act is considered by some to be the first shot of the Civil War.

Next week we will continue to explore Charleston history through the suburb of Wraggborough.