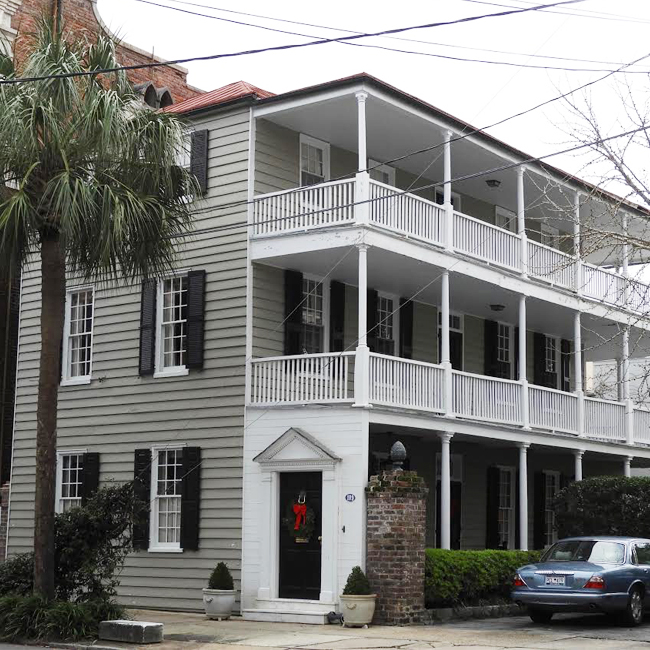 Written by Amelia Whaley. 25 February 2019 Posted in Diary of a Charleston Tour Guide

Martin Campbell, the first owner of 109 Broad Street was one of many Scottish immigrants to settle in Carolina and Georgia. He entered into a partnership with another Irishman, Francis McCartan; their trading firm, McCartan and Campbell, was located in Augusta, Georgia. Augusta, situated on the Savannah River, was founded by General Oglethorpe in 1736 and soon became an important trading post, especially for deer skins, with the Native Americans. Charleston was the port where the deer skins and other commodities were shipped to England. Campbell married his partner McCartan’s sister, Mary, and their son, McCartan Campbell and his wife, Sarah, lived in Augusta. McCartan Campbell inherited the Charleston property at the death of his father, and in 1784 Campbell sold 109 Broad Street to William Price, a Charleston merchant.

109 Broad is a wooden single house, one room wide, two rooms deep with a low hipped roof. The piazza was probably added several years after the house was completed since piazzas came into style around 1790; the piazza is usually located on the west or south side of a single house to catch the prevailing breezes. The piazza columns are slender and referred to as “colonettes”. The false door to the first floor piazza has a pediment with dental molding. The exterior shutters on the first floor are solid, an early means for protection from thieves in the night, while those on the second and third floor are louvered or slatted so that ventilation is not cut off when these shutters are closed.

109 Broad Street, with its quiet dignity, has overcome several Charleston disasters including the fire of 1861 and the earthquake of 1886. This house also withstood the threat of demolition in 1962 when the property was considered for a development project. Fortunately, the Preservation Society of Charleston was able to save the property. 109 Broad is definitely a survivor!