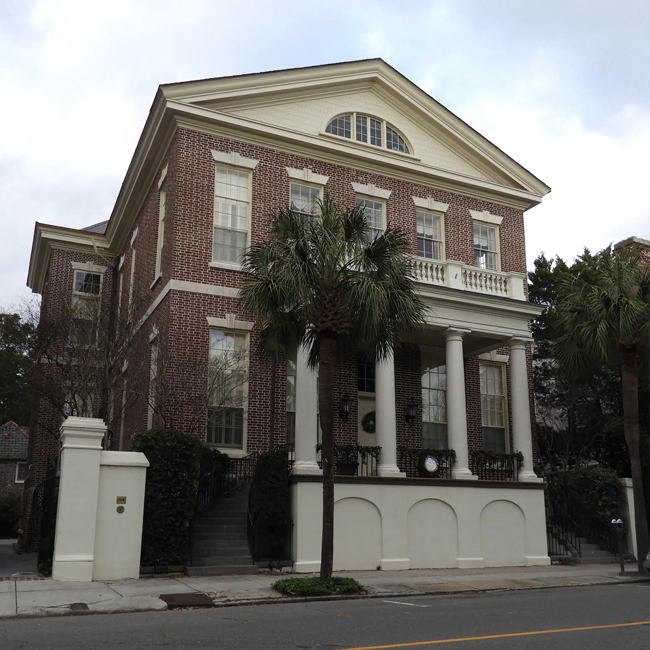 Written by Amelia Whaley. 28 January 2019 Posted in Diary of a Charleston Tour Guide

This week we visit 114 Broad Street, another Charleston house in the grand tradition, constructed of brick over a raised basement with a cascading staircase from each side of the portico. The construction was begun by Ralph Izard before 1800 but not completed until Colonel Thomas Pinckney purchased it in 1829. He and his wife, Eliza, the daughter of Ralph Izard, completed the house, hiring the Horlbeck brothers, builders of the Old Exchange Building, to finish construction. If you visit the Gibbes Museum of Art, make sure to see the miniatures in its collection of Thomas and Eliza Pinckney; they are an extremely attractive couple.

Colonel Thomas Pinckney came from two aristocratic Charleston families; his maternal grandmother was Rebecca Brewton Motte and his paternal grandmother was Eliza Lucas Pinckney, the young girl who grew the first indigo in the Lowcountry. His father was General Thomas Pinckney of the American Revolution, an aide to General Horatio Gates. After the war, General Pinckney was ambassador to Great Britain and later served as a diplomat to Spain. As a result of his father’s diplomatic assignments, Colonel Pinckney was well-traveled and well-educated, spending most of his childhood overseas.

The Pinckneys would have lived at 114 Broad for part of the year with the remainder of the year spent at their Lowcountry plantation. After the deaths of Colonel and Mrs. Pinckney, 114 Broad was inherited by their daughter who had married Ralph Stead Izard, her cousin – bringing the house full circle from the Ralph Izard who originally bought the property and started construction around to his grandson.

In 1866, Rosetta Ella Pinckney Izard sold the 114 Broad Street to the Roman Catholic Bishop of Charleston. The house remains the residence of the Bishop of Charleston and has been restored and decorated in period wallpapers and furnishings. Frequently this house is open during the fall and spring tours of private homes and gardens; if you ever get the opportunity to visit 114 Broad, don’t miss it.