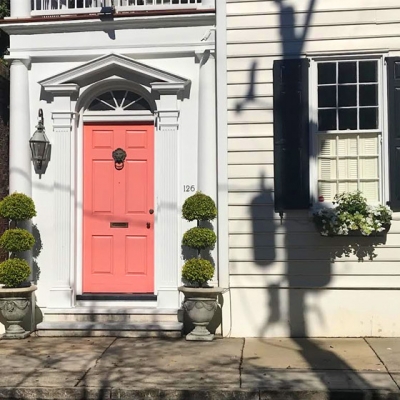 Written by Amelia Whaley. 13 November 2017 Posted in Diary of a Charleston Tour Guide

As we continue exploring Tradd Street, we’ll visit number 126 (next door to the Humphrey Sommers House we visited last week), which was built around 1732 by Alexander Smith.  In 1790, Dr. Peter Fayssoux and his wife Ann became owners of the property.

Dr. Fayssoux, born in Charles Town, was of French Huguenot heritage; he was one of many Huguenots in Charles Town who rose to prominence and served his city and community well.  Fayssoux studied medicine in Edinburgh and returned home in 1769.  Several years later, on June 28, 1776, Fayssoux was with Colonel William Moultrie at Fort Sullivan, a small unfinished fort made of palmetto logs on Sullivan’s Island, SC, where Moultrie and his men defeated nine ships of the British Navy that were trying to attack Charles Town.  Because palmetto logs are spongy and embraced cannon fire from the British ships, none of the projectiles penetrated the fort. For this reason, the palmetto became South Carolina’s state tree and the prominent image on our state flag.

Throughout the Revolutionary War, Fayssoux tended the injured, and in 1780 he was named Surgeon General of the Southern division of the Continental Army.  After the war, Fayssoux continued practicing medicine in the city and helped found the Medical Society of South Carolina, of which he served as the first president.

Later occupants of 126 Tradd also made contributions to the history of Charleston and the south. Fayssoux had two grandsons who grew up at 126 Tradd; they were both Confederate generals and one of them was responsible for giving General Thomas Jackson his nickname of “Stonewall.”  Another occupant was Beatrice St. Julien Ravenel, author of the 1945 book Architects of Charleston.

Although the house at 126 Tradd has been somewhat modified, interior corner posts remain exposed as they were when the house was originally constructed.  The first and second floor piazzas were added after 1800, when these additions first became popular in Charleston, to take advantage of the prevailing breezes.

Anybody walking down Tradd Street is stopped by the pink door at number 126.  Surrounded by lots of white, the pink door is an unexpected and pleasant surprise.  From the pink color to the lion’s head knocker, the doorway to 126 Tradd is a favorite of artists and photographers.

Next week we continue our focus on the historic houses of Tradd Street.