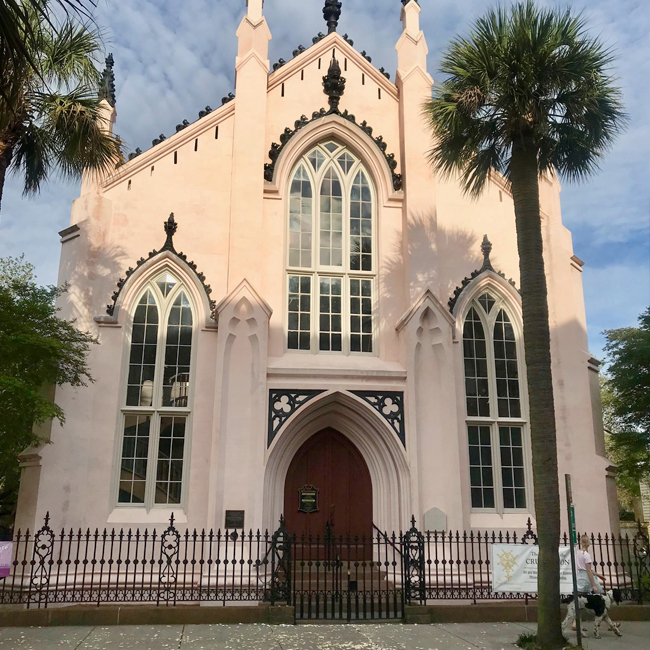 Written by Amelia Whaley. 15 April 2019 Posted in Diary of a Charleston Tour Guide

The French Huguenot Church is on the southeast corner of Church and Queen Streets. Across the street is the Dock Street Theatre, and straight ahead is St. Philip's Episcopal Church as Church Street curves around it. A French Huguenot Church has stood on this site, in the midst of these historic buildings, since 1687.

Years before the 1685 Revocation, it became obvious that Huguenots' rights were being removed. The first French Huguenots immigrating to Charleston arrived in 1680; they organized and built the first church on the site at 135 Church Street in 1687. That church was destroyed in the Great Fire of 1796. In fact, the church was sacrificed, blown up to stop that fire from spreading. The second church was built on the site in 1800 and was later demolished to make way for the present church, completed in 1845 by noted Charleston architect Edward Brickell ("E.B.") White. The present church is made of local brick, stuccoed and then painted a soft pink color.

In early times, this church was known as the "Church of the Tides" because several Huguenots were planters on land up the Cooper River. The services were timed so that the Huguenots could come down the river on the "easy tide" and return home by boat after the tide change six hours later.

In the photograph, the sidewalk in front of the church is covered in white rose petals from a wedding. The Huguenot Church has an active congregation with weekly services, and this is the only French Huguenot Church in the United States that still has an annual service in French. The interior is lovely with minimal Gothic elements. The Henry Erben pipe organ was established in 1845.

If you are strolling along Church Street during the day and see the doors open, accept the invitation to step inside and visit the church. Immediately inside the doors to the right, notice the plaque that lists certain Presidents of the United States. The list is comprised of presidents who are a direct descendent of French Huguenots. There was no more room on this plaque to list the last presidents who belong in this category. When a second plaque is installed, this list will include President George W. Bush '43, who is descended from the Huguenots through his mother (which is why Bush '41 is not listed), and President Barack Obama, who is also descended from Huguenots through his mother.