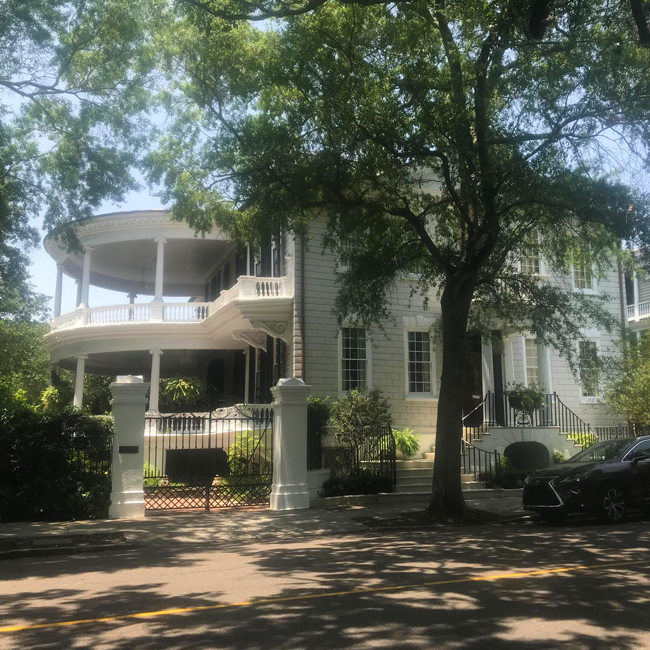 Written by Amelia Whaley. 06 June 2019 Posted in Diary of a Charleston Tour Guide

This week we're strolling back down Meeting Street to Number 15, a pre-Revolutionary house constructed around 1770. Imagine that there is no semicircular piazza on the side (which there wasn't in 1770), and you're looking at a double house in the Georgian style, which is all about harmony and balance, right down to the double staircase leading to the front entry.

Some may wonder what stone was used to build 15 Meeting because that is certainly what the façade appears to be. However, we don't have stone here. This house is made of cypress on top of a raised basement of Charleston brick. Using early faux techniques, the cypress was cut and beveled so that it looked like stone blocks. The raised basement of brick was stuccoed and scored to look like the same blocks, giving a unity to the facade.

The original owner of 15 Meeting was John Edwards, part of John Rutledge's privy council during the American Revolution. After the original 13 colonies left England and before we became the United States, each colony had its own government. Rutledge was the provisional President of South Carolina during this interim time. John Rutledge escaped capture by the British after they invaded and occupied Charleston in 1780, but John Edwards and other patriots in Charleston, including Rutledge's brother Edward, were captured and imprisoned in the Old Exchange Building until the prisoners could be shipped to St. Augustine, where they were incarcerated until the Americans won the war.

George Williams, Jr. later purchased 15 Meeting Street. 16 Meeting, known as the Calhoun Mansion, is across the street and was built by Williams' father, wealthy blockade-runner-turned-banker, George Walton Williams. George, Jr. followed in his father's banking footsteps, and he is the one who built the lovely semicircular piazza on the side of the house. As the story goes, he built it to host ice cream parties for the children of the Charleston Orphan House. And, as the last week of May and first of June has seen some unseasonably hot weather this year, an ice cream party sounds like a really good idea!