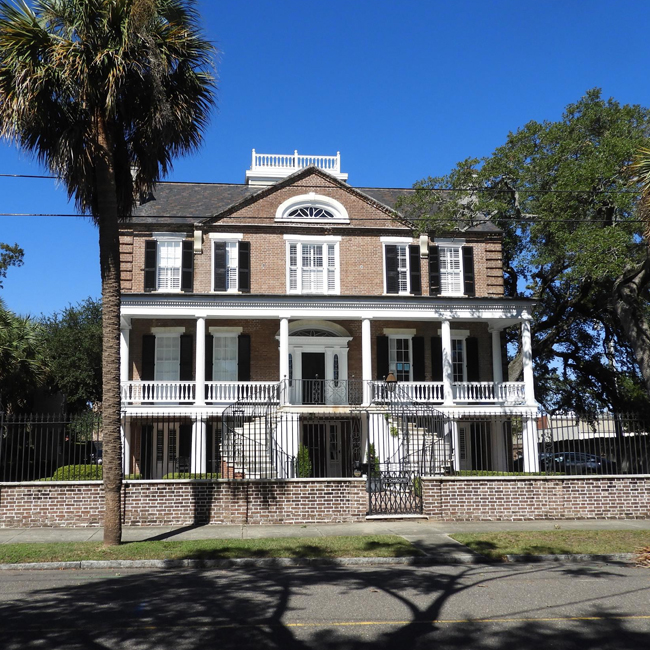 Written by Amelia Whaley. 22 October 2018 Posted in Diary of a Charleston Tour Guide

16 Charlotte Street on the corner of Charlotte and East Bay Streets is an imposing structure that sold in 2016 for $4,950,000 million.

Just a few streets over from the Aiken-Rhett House on Elizabeth Street, 16 Charlotte is not quite as big a property, but is still extensive with the main three-story house alone over 9,000 square feet. There are two outbuildings in the rear, almost certainly dependency buildings; one outbuilding is 2,000 square feet with the other almost 3,500 square feet. We also see an Aiken family connection which tends to weave itself through the Wraggborough neighborhood.

Robert Martin, who built this house as his town residence, was the nephew of William Aiken, Sr. and first cousin to Governor William Aiken (Jr.). Martin, born in 1791, was a merchant in the wagon trade, and he was also a planter. Martin’s plantation of almost 3,000 acres was Milberry Place in Barnwell County and named for his wife, Milberry Serena Daniel. When Martin died in 1852, the enslaved population on this plantation was around 105; the enslaved population at 16 Charlotte was 7.

16 Charlotte Street, built in 1835, is a brick double house in the Greek Revival style. Doric columns support the piazzas, and you can see from the photo how massive the ground floor columns are; the second floor columns are thinner but fluted for the piazza with the main entrance at the top of the elegant wrought iron double curved staircase. The most unusual feature inside is a bathtub in the basement said to be the first stationary bathtub in Charleston. Supposedly carved from a block of Winnsboro granite, the bathtub is 7 feet long!

A moving story associated with 16 Charlotte Street has come to light in the past few years. According to Mark Auslander at Central Washington University in his November 29, 2016 article entitled “Slavery’s Traces: In search of Ashley’s Sack” (https://southernspaces.org/2016/slaverys-traces-search-ashleys-sack), it seems that a cotton feed sack was given by a South Carolina slave named Rosa to her daughter Ashley, a young slave girl at the time Ashley was being sold. The sack was passed down through her family and embroidered in 1920 by Rosa’s great-granddaughter, Ruth Middleton, with words explaining the sack’s origin and also Rosa’s last words to Ashley, “It be filled with my Love always.” Years went by and the sack was discovered and purchased for $20.00 at a flea market; the anonymous donor gave it to Middleton Plantation because of the Middleton name, and for several years Middleton Place preserved and displayed “Ashley’s sack”, which was later loaned to the Smithsonian Museum of African American History. Auslander’s article and research point strongly to the possibility that Rosa was one of Robert Martin’s slaves at 16 Charlotte Street and that Ashley was one of his slaves at Milberry Place. Ashley was 9 years old at the time she was sold.

Next week we’ll continue exploring the Wraggborough district of Charleston.