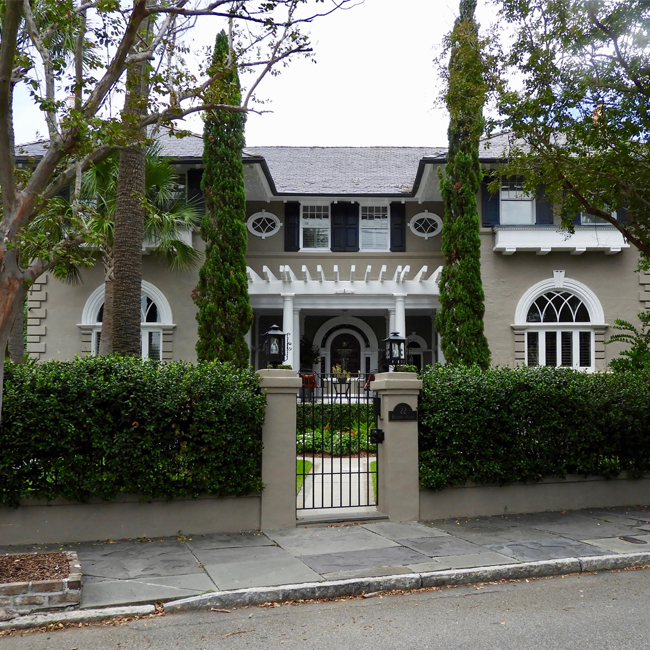 Written by Amelia Whaley. 17 September 2019 Posted in Diary of a Charleston Tour Guide

This week we visit 22 Rutledge Avenue, the last house on Rutledge across from Colonial Lake. 22 Rutledge is an unusual construction for Charleston; the style is Renaissance Revival, and from the sidewalk there is little indication of the amount of property behind the house. Tucked behind 22 Rutledge is a carriage house, pool and lush garden.

Dr. Manning Simons built this house for his bride Florence (Alexander) Simons in 1902. She lived here until 1968. The architect Simons chose for 22 Rutledge was Bradford Lee Gilbert, a New York architect who designed the first skyscraper of New York City, the Tower Building at 50 Broadway, in 1889 (demolished in 1914) and also the Flatiron Building in Atlanta, Georgia in 1898. Gilbert was in town, having worked as architect for the South Carolina Inter-State and West Indian Exposition (the "South Carolina Exposition"), which was held in the area since developed as Hampton Park.

The South Carolina Exposition ran from December 1, 1901 to June 1, 1902 with the idea of bringing commerce to the area, jumpstarting the economy and highlighting sea island cotton as an export crop. While the economy was still depressed during this time, people enjoyed the exposition and its fantasy-like buildings, constructed to be temporary and then demolished when the exposition was over. The Liberty Bell was in residence at the Exposition for 6 months, and President Teddy Roosevelt spend a week in Charleston as part of the celebrations.

Dr. Simons came from an old Charleston family; his ancestors fought on the Patriot side of the American Revolution. His father James was a lawyer who served in the S.C. Legislature and was appointed Brigadier General of the Confederate Army at the outbreak of the Civil War. Manning Simons was a rising junior at the College of Charleston when the Civil War broke out, but he left school and served with the S.C. Artillery during the war. After the war was over, Simons completed his studies at the College. When he later finished his medical education, Simons became a surgeon and professor of surgery at the Medical College of South Carolina (now the Medical University).

Located at the corner of Rutledge Avenue and Broad Street and overlooking Colonial Lake, this house is considered prime property in historic Charleston. After 1968, 22 Rutledge was home to a variety of owners, and in 2016, the house sold for almost $3,000,000.