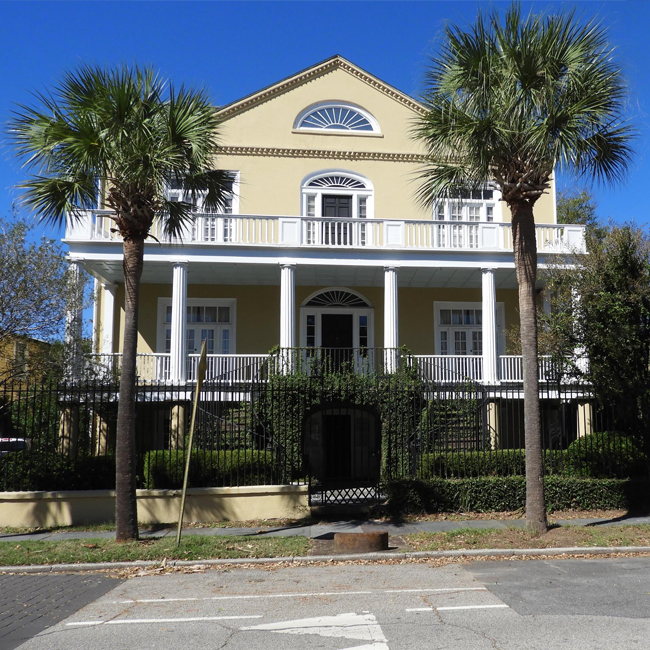 Written by Amelia Whaley. 05 November 2018 Posted in Diary of a Charleston Tour Guide

This week we visit 28 Chapel Street in Wraggborough, another Greek Revival home built in Charleston's antebellum period. Over 6,000 square feet, 28 Chapel is two and one-half floors atop a raised basement. A lovely iron double curving staircase gracefully rises to the main piazza and entry with a fanlight above and sidelights on either side of the front door. The main piazza is comprised of Doric fluted columns; the second floor has no piazza but the door also has a fanlight and sidelights. As expected, this door is not as large or as impressive as the main door below. The third floor also has a fanlight in the center of the pediment.

28 Chapel was built in 1832 by Elias Vanderhorst (pronounced in Charleston as "Vandrost"), and remained in his family until 1915 when Adele Allston Vanderhorst, widow of Elias' son Arnoldus died. In 1928, the house was sold and converted to apartments. In the late 20th century, the house was restored.

The Vanderhorst family originally came from Holland; sometimes you still see the name spelled “Van Der Horst.” Baron Johannes Van Der Horst came to England with William of Orange in 1688 and later traveled to Carolina where he settled. The Vanderhorst family became prominent members of Charleston society and is associated with not only Charleston but also Kiawah Island, with Elizabeth Raven Vanderhorst inheriting the eastern half of Kiawah from her grandfather, John Stanyarne, at his death in 1772. Elizabeth and her husband, Arnoldus, built the Vanderhorst plantation house which still exists at Kiawah Island and after the Revolutionary War, Arnoldus began to plant cotton at his Kiawah plantation. When President George Washington spent a week in Charleston during his Southern Tour, Arnoldus was Charleston’s Mayor and hosted a stag party for the President at McCrady’s Tavern. In 1794, Arnoldus was elected Governor of South Carolina.

Arnoldus and Elizabeth were the parents of Elias Vanderhorst who built the grand house at 28 Chapel Street. Elias inherited the Kiawah property in 1815 when Arnoldus died, and he married Ann Elliott Morris in 1821; they had five children and had almost as many homes. 28 Chapel would have served as their “townhouse”; they also had the Kiawah plantation house and houses on both Edisto Island and Sullivan’s Island at the peak of the antebellum period. As with most other Southerners, the Civil War left Elias and his family in dire straits; however, the family was able to hold 28 Chapel until 1915.

We will run into the Vanderhorst family again as we explore Wraggborough and other parts of historic Charleston.