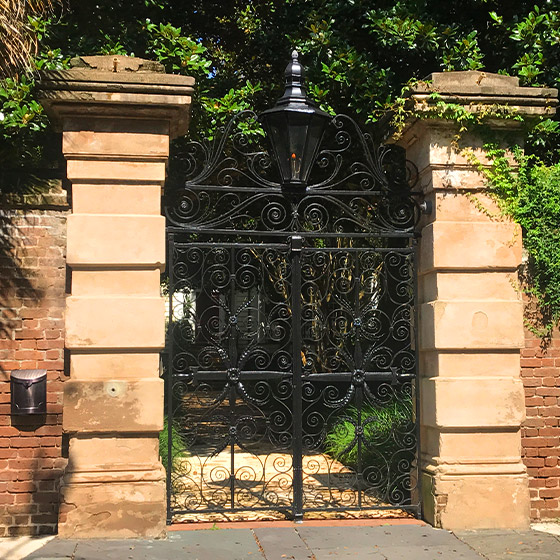 Written by Amelia Whaley. 08 August 2017 Posted in Diary of a Charleston Tour Guide

While most visitors to Charleston may hit the highlights of the historic district (the Four Corners of Law, Charleston Market, the Battery, the Walled City area), the history and beauty of Charleston extends to many other areas within walking distance of the downtown hotels. If you're only here for a short time, then you simply have to return (and more than once) to enjoy more of the city.

For instance, two ladies from Seattle, Melanie and Penny, took my walking tour almost two years ago, and we discussed that the next time they visited we would do a different route. Well, the evening before Hurricane Matthew hit Charleston as a weakened Category 1 on Saturday, October 8, 2016, I received a voicemail from Melanie.

"Hope you'll be okay; Penny and I fly in to Charleston on Monday. Are you available for a walking tour of a different route on Tuesday?"

On Sunday, I was downtown assessing the damage and the best walking tour route for Tuesday.

Legare Street was part of that route; it's one of those streets that is packed with history, ghost stories, and of course, scandal. First, we pronounce "Legare" as "le-gree," not "le-gare"; the street was named after Solomon Legare of French Huguenot ancestry. The house at 32 Legare was built before 1810 on part of Solomon Legare's original property, which passed to his descendants and was later sold to various owners. We know a wall existed in 1818; over the ensuing years, the house has been modified and enhanced several times. The garden is a treat, and is sometimes open to the public during fall or spring tours. And, if you've got money, 32 Legare is currently on the market - for $19.5 million...

No matter who buys it, 32 Legare will forever be associated with its famous "Sword Gate," composed of two parts that open and close from the center. In the 1830s, German immigrant and iron worker Christopher Werner designed a wrought iron Sword Gate for the Guard House (police station) at the southwest corner of Meeting and Broad Streets (this site is now the Federal Post Office). Apparently Werner misunderstood the request, got the math wrong, and made two pairs of Sword Gates. Werner was stuck with the other Sword Gate until the new owner of 32 Legare Street, British Consul George Hopley, purchased the gate and installed it at his new home around 1850. As a side note, the Guard House was destroyed by the 1886 earthquake, but the Sword Gate was intact. This Sword Gate is now at the Citadel with each part of the gate situated to either side of the main gate into the campus, and the swords in the center of each part of the gate are painted gold.

The Sword Gate House is a favorite of mine, mainly because of a family scandal. In 1819, 32 Legare Street was purchased by Andrew Talvande, a refugee from the Santo Domingo slave revolt. His wife Madame Talvande opened a French boarding school for young ladies at 32 Legare. In 1828, my long-ago cousin, Maria Whaley from Edisto Island, was sent to live at Madame Talvande's school by her father, Colonel Joseph Whaley. But being a Whaley and a female, Maria had a mind of her own. To Madame Talvande's horror, Maria eloped. To say that Colonel Whaley was not amused would be an understatement. It was bad enough that Maria eloped, but the real scandal was that she eloped with Northerner George Morris, a man from New Jersey.

The rich history of 32 Legare is just a taste of what's to come as we explore more Legare Street dwellings in the next few weeks.