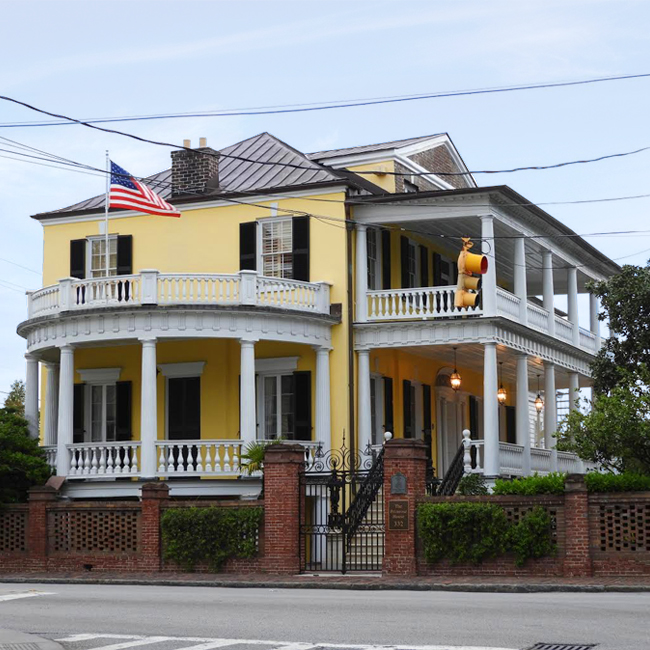 Written by Amelia Whaley. 09 August 2019 Posted in Diary of a Charleston Tour Guide

332 East Bay Street was built in 1817 in the Regency style. This stuccoed brick home, painted a cheery yellow, has side piazzas and a curved piazza on the front. Since 332 East Bay sits on a corner with a small business strip to one side with a substantial garden on the other side of this large lot, Primrose House stands out in the immediate vicinity.

The prior house on this site was the home of Christopher Gadsden, the great South Carolina patriot leader, later Brigadier General in the Continental Army and Governor of South Carolina. Locally, Gadsden is best known for creating the "Gadsden Flag" -- most people recognize it as the bright yellow flag with the coiled snake and the words "Don't Tread on Me."

Primrose was a member of the St. Andrews Society, that prestigious benevolent society founded in Charleston in 1729 with its first president being General William Moultrie of Revolutionary War fame. In the early 18th century, immigrants to Charles Town founded benevolent societies to help new immigrants find jobs, housing, etc. Most of these societies are still in existence, but operate only as social clubs now. However, many still gift scholarships to local youth. The St. Andrews Soceity meets regularly and has an annual banquet where they drink scotch and eat haggis (which ranks as the most unappetizing dish I've ever heard of and may be why a lot of scotch is consumed at the banquet).

Primrose House was part of the Ansonborough Rehabilitation Project founded by Historic Charleston Foundation and donated to the Foundation by Mr. and Mrs. Charles Woodward in 1960. In the late 20th century, Primrose House housed an upscale and popular restaurant. In 1992, the new owners of the restaurant were Chef Sergio Franco and his wife Rosemary, a pastry chef. The couple lived in a carriage house nearby on Anson Street, where Rosemary was brutally murdered in 1994. Sergio was arrested, but there was not enough evidence to hold him. He left the area after he was released. Rosemary's murder has never been solved. The restaurant closed, and the property reverted back to a residence.