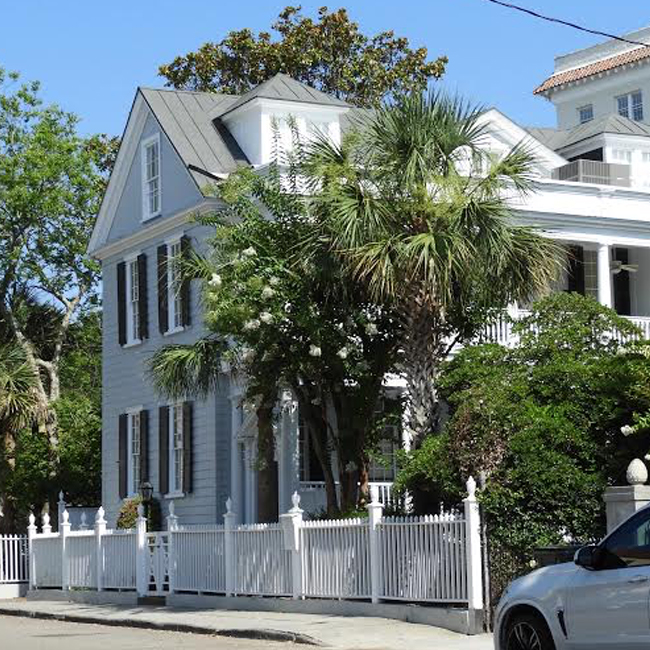 Written by Amelia Whaley. 26 November 2018 Posted in Diary of a Charleston Tour Guide

This week we go back near the tip of the Charleston peninsula to visit 39 South Battery, one of my favorite examples of a single house (one room wide, two rooms deep). In fact, I painted a watercolor of this house many years ago and reproduced it as my first offset lithograph limited edition.

Located one street behind Murray Boulevard and the low battery wall, the house has a view of Fort Sumter House at the left rear. 39 South Battery, just under 5,000 square feet, was built around 1825, and the interior boasts exquisite woodwork with heart pine floors. There is also a dependency building on the property, and the garden has now been landscaped by Robert Chestnut, a noted Charleston landscape architect.

39 South Battery was built by Mr. Magwood, a wealthy planter, for his daughter Susan, who married Andrew Moreland, which is why this house is also known as the "Magwood-Moreland House." There seems to be come confusion as to whether Susan's father was Samuel or Simon Magwood. Several publications reference the builder of 39 South Battery as Samuel Magwood, but I am unable to find any extra historical references to him. However, historical references abound regarding Simon Magwood. Originally from Ireland, Simon became a wealthy planter here with several children, one of whom is listed in various references as Susan C. (Magwood) Moreland.

In any event, Magwood built a sturdy house. 39 South Battery has withstood almost 200 years of hurricanes, earthquakes, cyclones and floods. The foundation on which the house was built consists of criss-crossed palmetto logs, which appear to have been an inspired choice by the original builder. When there is an earthquake or heavy inclement weather, the house yields and removes the tension in the flooring and walls that would cause cracks or implosion. I am always amazed at how advanced society was here in 1825.