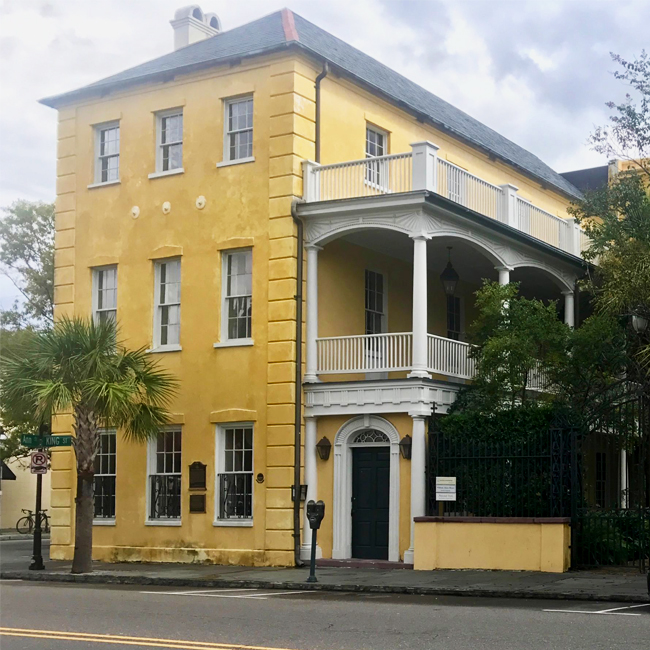 Written by Amelia Whaley. 13 May 2019 Posted in Diary of a Charleston Tour Guide

We return to town this week and visit 456 King Street, known as the William Aiken House. Its namesake, William Aiken, was an Irish immigrant born in 1788 who came to America at the age of 10. Aiken became prosperous in the cotton and rice business of South Carolina. His name lives on in the South Carolina town and county of Aiken. He was also the father of Governor William Aiken who lived several blocks away on Elizabeth Street in the museum house known as “The Aiken-Rhett House."

William Aiken built 456 King Street was built around 1810 in the Adam style, or Federal style as it is known in the United States. This is a large property with its octagonal section added around 1831. In 1827, the idea of a South Carolina railroad was born in a meeting at this house. By 1828, the South Carolina Legislature had chartered the South Carolina Canal and Railroad Company (SCC&RR), and Aiken was elected the first president of that railroad. The property behind 456 King Street was developed as part of the railroad complex in Charleston, and several of these properties are listed with 456 King as being a National Historic Landmark.

Unfortunately, William Aiken died in 1831 after being thrown from a carriage. His home at 456 King went on to house various nonprofit organizations. The property was restored in the late 20th century and is now an event venue; in fact, 456 King Street is considered one of the premier and most popular wedding venues in South Carolina. Many times I have walked down King Street and been amazed and enthralled with the view of the grounds transformed for a wedding or other event. With its two ballrooms, private gardens and formal dining rooms, 456 King is a perfect example of recycling an historic site to meet the needs of the 21st century.