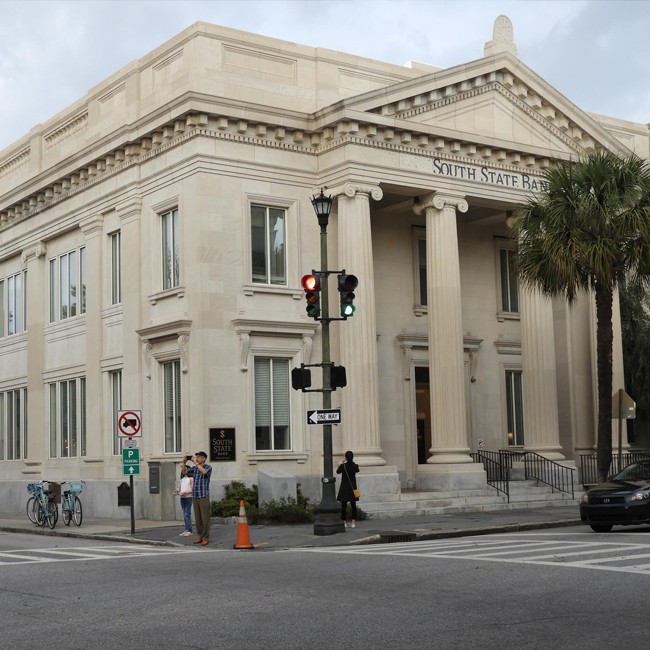 Written by Amelia Whaley. 11 February 2019 Posted in Diary of a Charleston Tour Guide

This week we'll go back up Broad Street to 46 Broad where South State Bank is now located. This building is new by historic Charleston standards, having been constructed less than 100 years ago.

46 Broad was built as a bank in 1929, certainly not the most auspicious year for banking since the Great Crash (of the stock market) occurred in October of that year and ushered in the Great Depression. From its beginnings to the present, banking has remained the business of 46 Broad. Built by Olaf Otto, a civil engineer who also designed the Savannah River Bridge, this building stands out with its portico of fluted columns and ionic capitals.

46 Broad Street is far more historic than its ninety years; the site has been a hotbed of history since the early 18th century. This was the site of various taverns, and the taverns were where everything happened. Politics, court, meetings, entertainment, food and drink (along with at least a few brawls, I imagine) -- these made up the DNA of the early Charleston taverns. The people of Charles Town enjoyed (and still do) all things social, including theatre, music, dancing, eating and drinking.

Most taverns had a "long room" where early court proceedings and meetings could be held. The long room was also used for entertainment, such as theatre performances. Remember that in the 18th century, actors were like wandering troubadours; they wandered through the American colonies and stayed where they were welcome, held plays and then moved on, with the hope of returning in the next season.

Imagine the early political meetings, discussions and debates in the taverns, especially as the colonies came closer to revolution against British tyranny. After all, before the American Revolution, most of the planter aristocracy here sent their young sons to be educated in England; these boys returned home years later as highly educated men. Most had gone on to study law in London before they returned to Carolina. They often had friends and family in England and hoped the King would see reason regarding parliamentary representation for the colonies. There were other land owners who were artisans, the craftsmen and builders, many of whom were known as the Sons of Liberty, meeting under the Liberty Tree on Christopher Gadsden's land on the upper part of the peninsula.

The various taverns at the 46 Broad site include Shepheard's Tavern, Swallows Tavern and The City Tavern. Shepheard's Tavern doubled as the post office starting in 1743. An early Masonic lodge was organized here in 1736. The first Chamber of Commerce in America was founded on this site in 1773, and the first Scottish Rite lodge was organized on this site in 1801. Truly the ground at 46 Broad Street is steeped in Charleston history.