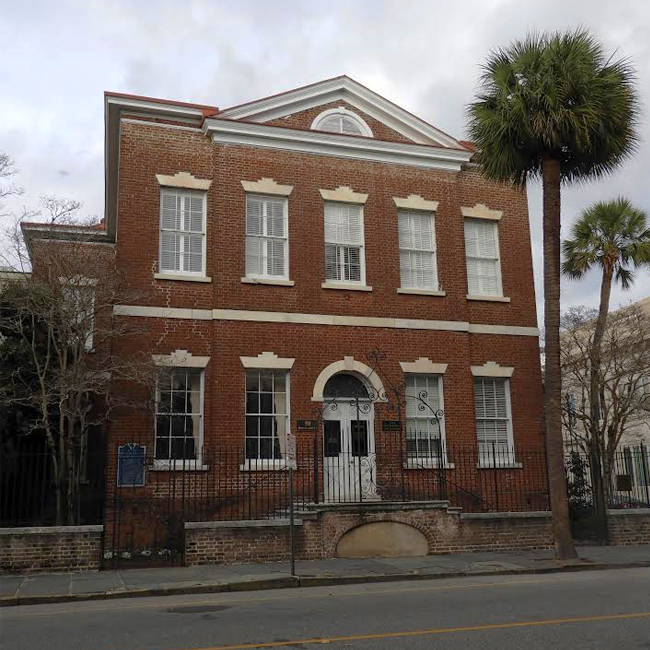 Written by Amelia Whaley. 18 February 2019 Posted in Diary of a Charleston Tour Guide

This week we visit another original bank building at 50 Broad Street. This two-story building atop a raised basement was built in 1798 to house the Bank of South Carolina. Presently 50 Broad Street is no longer a bank, but has housed different businesses through its illustrious life.

Brick and marble are the prominent exterior features of 50 Broad and would seem to symbolize the solidity of the bank. Since Charleston has no stone, the imported white marble also symbolized the costliness of the building. The local brick, probably from the Boone Hall area, is laid out in a pattern known as the Flemish bond, where each row or "course" alternates a header, stretcher, header, stretcher, etc. More time and labor are required for this style of brickwork and thus Flemish bond is more expensive. It is also considered the most attractive of brickwork patterns.

In 1803, William Withers, having recently moved to Charleston but after running out of money (he supposedly gambled his funds away), decided he should replenish his funds through a rather creative bank robbery attempt. For approximately three months, Withers lived underground while digging a tunnel to break into the bank vault. He was discovered and arrested before he ever reached the vault, and the robbery attempt known as the "Ground Mole Plot" was thwarted.

Several important Charleston institutions were located in this building at various times. The Charleston Library Society, founded in December of 1748, was located at 50 Broad from 1835 to 1914. The Charleston Chamber of Commerce, perhaps the oldest municipal Chamber of Commerce in the United States and founded in 1773, was located here until 1966 when Citizens and Southern National Bank purchased the property. Citizens and Southern restored the building, and 50 Broad Street was listed on the National Register of Historic Places in 1971. In 2006, 50 Broad Street was purchased by the City of Charleston for additional office space.