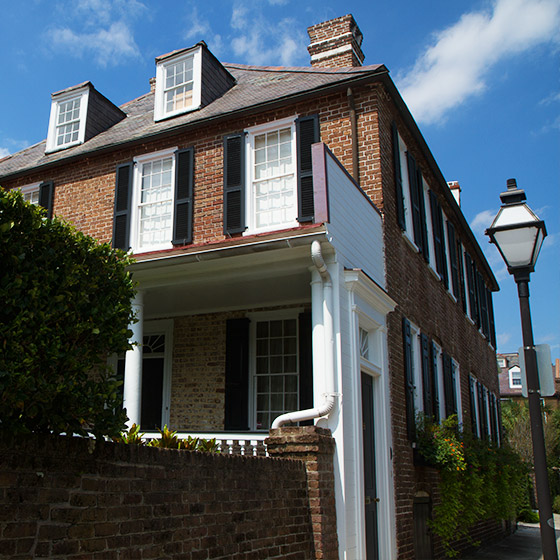 Written by Amelia Whaley. 15 September 2017 Posted in Diary of a Charleston Tour Guide

This week we focus on 55 King Street, built around 1762 by a German immigrant Frederick Grimke. Grimke originally built this structure as a double tenement, and it has since been converted to a single-family residence.

This colonial-style brick house was built on a large lot that Grimke purchased in the 1740s. The house would have been divided in the middle of the six windows in front with a large grate at the bottom outside corner of each tenement.

Notice that the brick is laid in the design called "Flemish Bond," which is comprised of alternating headers (end of the brick) and stretchers (side of the brick) in each row. Flemish Bond, as with American, English, and other bonds where the brick is laid out in different patterns, provides a decorative effect, but the main reason for such brickwork patterns was structural as the different layouts allowed for a stronger wall.

Frederick Grimke and his wife Martha had two daughters, Mary and Elizabeth. Mary Grimke was the second wife of Alexander Fraser, and Elizabeth married John Rutledge. 55 King Street is particularly known for being the residence of Frederick Grimke's grandson Charles Fraser, a noted Charleston artist.

Charles Fraser was born in 1782, several months before the end of British occupation of the city. Fraser's parents, Alexander and Mary Fraser, died when he was nine years old, and Charles was raised by an older brother. Fraser's artistic abilities were evident early on. However, he studied for and practiced law for several years before deciding to follow his passion, art, on a full-time basis. Accomplished in both watercolor and oil, Fraser painted miniature portraits on ivory, larger oil portraits, and landscapes. Fraser's miniature of Francis Kinloch Huger, watercolor on ivory, was commissioned as a gift for General Lafayette and is now in the collection of the Metropolitan Museum of Art. Several Fraser miniatures are also in the Smithsonian. One of Fraser's most famous portraits is of General Lafayette himself.

If you have a chance to visit the Gibbes Museum of Art at 135 Meeting Street, you must visit the second floor to become better acquainted with the work of Charles Fraser. There is a permanent exhibit where you can view some of his miniatures, oil paintings, and especially his watercolor journal (my favorite). One of Fraser's most important contributions to Charleston history has been the preservation, through his watercolors, of historical buildings and landscapes that have since been altered or destroyed.

When I lead tours in the historic district, we see these architectural gems, lovely gardens, and exquisite ironwork as in the case of 55 King Street and other properties. However, for me it's the stories, the people, and the events associated with these properties that I really enjoy sharing. They make our city come alive.