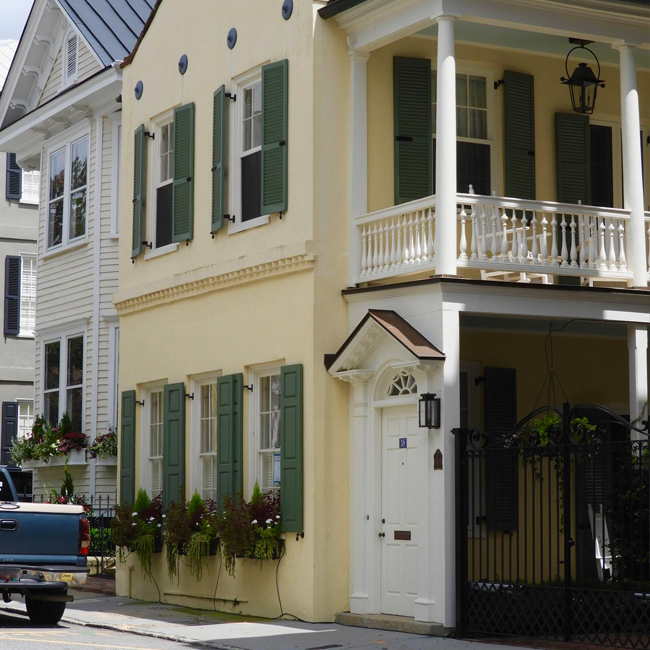 Written by Amelia Whaley. 23 July 2019 Posted in Diary of a Charleston Tour Guide

59 Tradd Street is a jewel of a property, built by John Dart in 1773. 59 Tradd is a single house with approximately 2800 square feet, a small house by Charleston standards and the color of butter.

In the early part of the 20 th century, 59 Tradd became home to a young Alicia Rhett, one of Charleston’s most famous residents. Alicia was born in Savannah, but she was what Charlestonians would call well connected. Through her father, Alicia’s Charleston heritage goes back to the beginning of the English settlement; she is descended from Colonel William Rhett of Charles Town who captured the infamous “gentleman pirate” Stede Bonnett and his crew in 1718. This is the same William Rhett who much earlier had been sent by the Lords Proprietors to France to bring exiled Charles Stuart home to England to be crowned King Charles II and for whom Charleston is named.

After Lieutenant Edmund Rhett, Alicia’s father, died when she was three, Alicia and her mother moved to Charleston. Alicia had many interests, among which were art and acting, and both became much more than hobbies for her. She starred in “The Recruiting Officer," the opening play of the newly restored and renovated Dock Street Theatre (formerly known as the Planters Hotel) in 1937. Alicia was “discovered” there by a casting agent from Hollywood, who persuaded her to take a screen test, and Charleston’s well-bred lady became India Wilkes, Ashley’s sister, in the movie Gone With The Wind (so, if Rhett Butler had been real, Alicia would have been “his people”)!

After the movie, Alicia returned home to Charleston, became a radio personality, focused on her art and continued her acting in local productions. She turned part of the top floor of 59 Tradd into her art studio and painted portraits, many in oil. However, among locals, Alicia is known for her portraits of children in pastel. Alicia Rhett lived to be 98 years old and died January 15, 2014 at the Bishop Gadsden Home on James Island, leaving a wonderful visual legacy for Charleston.

On a personal note, two years ago I was guiding four ladies from Washington State around town. We were standing across the street from 59 Tradd, talking about Alicia, when a car pulled up and just stopped on the street. A gentleman came out of 59 Tradd and retrieved a painting and photograph from the driver who then left. The gentleman was the owner of 59 Tradd and graciously showed us Alicia’s self-portrait and her official photograph from Gone With The Wind which was being lent to him by Alicia’s family because 59 Tradd was on tour that evening; he even invited us in to see his house!