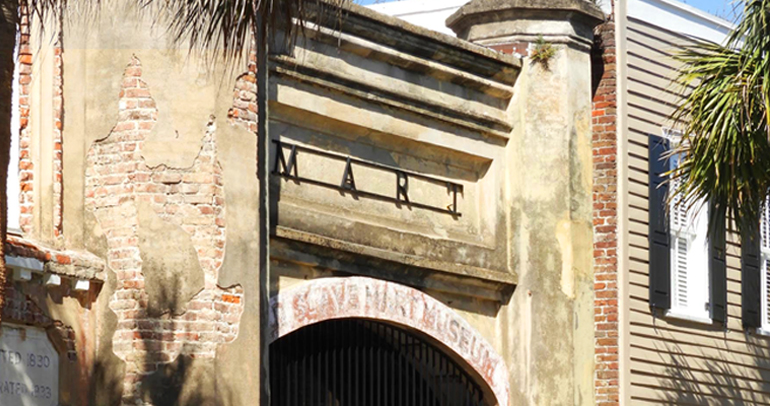 Written by Amelia Whaley. 20 August 2019 Posted in Diary of a Charleston Tour Guide

The history of the enslaved African Americans brought against their will to the port of Charleston in the 17th , 18th and 19th centuries is similar to peeling back the layers of an onion – there’s always another layer to discover. The best place to begin to unpack the institution of slavery in Charleston is the Old Slave Mart Museum at 6 Chalmers Street, open Monday-Saturday, 9:00 a.m. – 5:00 p.m. Built in 1859, this structure is the only surviving example of a slave auction house or gallery in South Carolina, and it has been on the National Register of Historic Places since 1975.

Enslaved African Americans were originally auctioned off outdoors, many times right off the docks. After the Old Exchange was built as the Customs House in 1771, many of the auctions occurred on property directly to the north of the building. In the 19th century, Charleston passed a law that prohibited slave auctions from being conducted in public outdoor areas. As a result, auction “rooms” or “marts” sprang up, especially around Chalmers Street and the surrounding area.

The museum is housed in the remaining portion of Ryan’s Mart, a complex comprised of several structures on Chalmers Street connected by a passageway that opened up into a courtyard and a large building, which fronted on Queen Street, that served primarily as a jail to hold the enslaved until auction. This building also had rooms set aside for auctions. Other structures around the courtyard included a kitchen and a morgue; the structures in the complex were built before 1859 for Thomas Ryan. In 1859, the property was sold to another slave auctioneer, Ziba Oakes, who built the entrance on Chalmers Street as we see it today with the unusual octagonal pillars and gated arch. The entrance led to a one-story shed where Oakes conducted his slave auctions.

After the Civil War, a second story was added and 6 Chalmers was used as a tenement; the other buildings of the complex were eventually demolished and the lots separated from what is presently the Chalmers Street property. In 1938, Miriam Wilson, daughter of a Union soldier, purchased the two-story building and created the Old Slave Mart Museum, featuring the art and history of enslaved African Americans. After Wilson died in 1959, two Charleston sisters, Louise Wragg Graves and Judith Wragg Chase took over and ran the museum until it closed in 1987. Fortunately, the City of Charleston purchased the building, and over the ensuing years the museum has become an important resource in the continual unfolding of the history of the enslaved African Americans in Charleston, the Lowcountry and the deeper South.