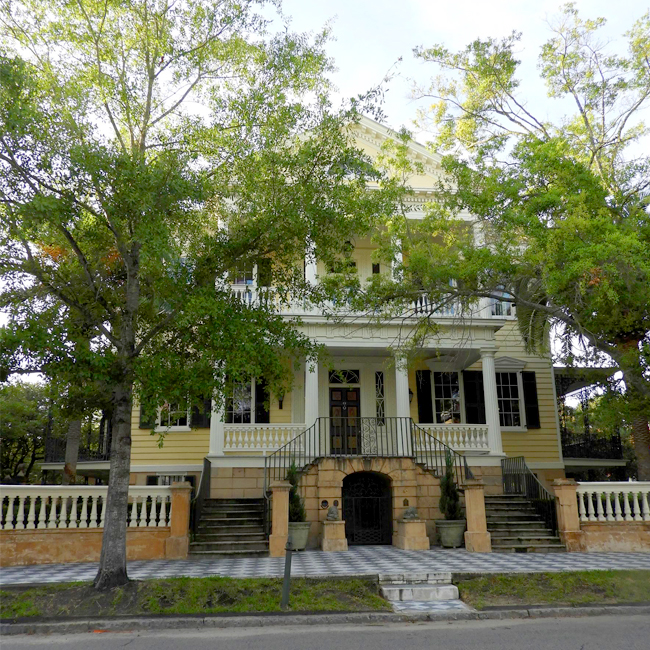 Written by Amelia Whaley. 27 August 2019 Posted in Diary of a Charleston Tour Guide

This week we visit 60 Montagu Street, in the area of Harleston Green and close to the Ashley River. Montagu street was named for one of Carolina's last Royal Governors, Sir Charles Greville Montagu.

60 Montagu is a large property with a grand house of approximately 9,400 square feet with formal gardens in the rear. Set on a high raised basement, this double house was built in the Adam style around 1800 by a planter and factor Theodore Gaillard, Jr.

The Gaillards were French Huguenots who emigrated from France to Charles Town in 1687. Many became planters along the Cooper River, and the family soon became one of the most prominent in Charleston. In the early 1950s, J. Palmer Gaillard, a direct descendent of Theodore Gaillard, Jr., lived at 60 Montague for a brief time. He served as mayor of Charleston for four terms from 1959 to 1975.

Another prominent Charleston family was also associated with 60 Montagu when it became the home of Washington Jefferson Bennett in 1851. Obviously named after presidents Washington and Jefferson, Bennett ran the family rice and lumber mill business. The mills were located nearby on the Ashley River. Bennett's father was Thomas Bennett, who was a businessman, banker, S.C. Legislator, and Governor. Washington Jefferson Bennett is the man who adopted Andrew Buist Murray, whom I wrote about in the post on 28 South Battery, from the Charleston Orphan House. Murray, always grateful to Charleston and his adoptive family, became known as a major philanthropist here. Murray Boulevard (or what locals call Low Battery) is named for him.

About six months before he died, Robert E. Lee stayed with the Bennett family at 60 Montagu for several days in 1870. When a crowd assembled outside the home in order to see the famous general, Lee stepped out onto the second floor portico to speak to them.