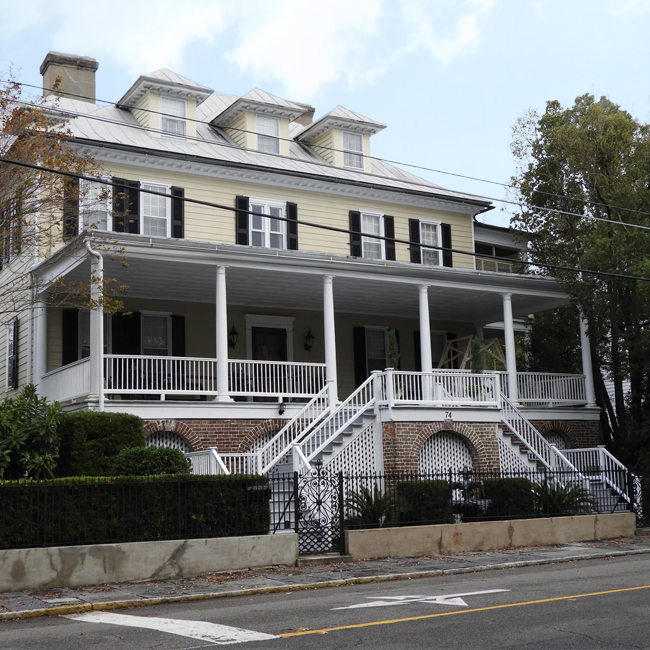 Written by Amelia Whaley. 10 December 2018 Posted in Diary of a Charleston Tour Guide

This week we return to the west side of the Charleston peninsula, not far from the Colonial Lake. We will focus on 74 Rutledge Avenue, a fine example of a double house completed around 1783 by Isaac Child Harleston.

Harleston was an officer during the American Revolution and a member of the Continental Congress. He was the son of John Harleston who inherited a great deal of acreage in this area of the peninsula. John Harleston's aunt was Affra Harleston, a young woman and indentured servant who arrived here in 1670 on the first ship from London, the Carolina. Affra fell in love with the first mate of the Carolina, John Coming, who was given a substantial land grant that included this area, now known as "Harleston's Green." John and Affra married, but had no chlidren, so their land and other assets were inherited by their nephews.

Soon after 74 Rutledge was completed, the house sold to Peter Bocquet, another officer in the American Revolution and later member of the South Carolina General Assembly. The property remained in the family until Bocquet's death in 1793, when it was purchased by John Matthews, a member of the Continental Congress and second governor of the State of South Carolina. From 1783 until Governor Matthews' death in 1802, 74 Rutledge was owned by three men who helped shape not only the new United States, but also the new state of South Carolina.

74 Rutledge is located on a large lot. To the south of the house is a lovely English formal garden, the bones of which date back to the house's early days. Built much earlier than any of the other structures nearby, 74 Rutledge with its plantation-house ambiance must have had a commanding presence with just land and creeks in the immediate vicinity before 1800.

Next week we will continue to explore Charleston history through her places and structures.