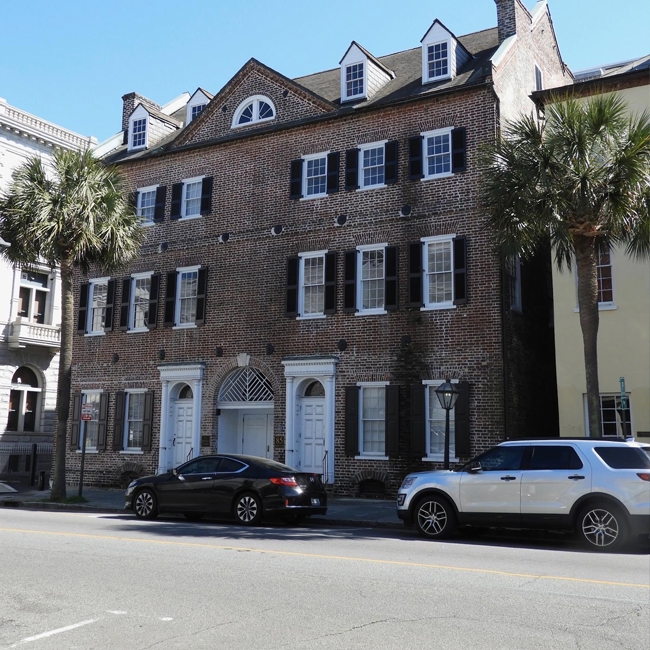 Written by Amelia Whaley. 08 April 2019 Posted in Diary of a Charleston Tour Guide

Built as a double tenement by Josiah Smith, the grand old brick building with the arched passageway at 85-87 Broad Street dates from 1795. Smith gave one tenement to each of his two sons, William and Samuel. The Smiths descended from an old and distinguished family who had helped settle Carolina.

Landgrave Thomas Smith came from England to Carolina in 1684 and became the proprietary governor of Carolina in 1693. He died a year later at Medway Plantation up the Cooper River. His grandson Josiah Smith graduated from Harvard, became a Presbyterian minister in Charles Town, and was captured with other patriots in the American Revolution and imprisoned in St. Augustine, Florida. He died in 1781.

Josiah Smith's son, also Josiah, became a banker and merchant in Charles Town, and together with his father was capture by the British and imprisoned in St. Augustine. This Josiah was the builder of the double tenement. Tenements were usually built to be used as rental properties. However, since Smith intended his building as a gift to his adult sons, it received much more attention to detail than the usual rental.

Charleston definitely likes to recycle her historic buildings. 85-87 Broad is now part of the Federal Courthouse Annex, as it is conveniently located next to the US Post Office and close to the new Federal Courthouse on Meeting Street. In 2004, the property was sold for $19 million. In October 2018, the property was sold again, this time for $24 million, to a company that leases buildings to the federal government.