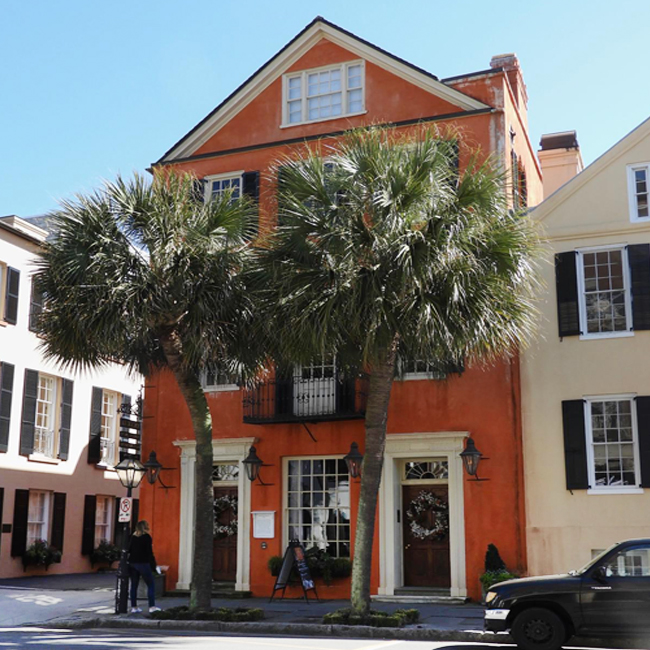 Written by Amelia Whaley. 25 March 2019 Posted in Diary of a Charleston Tour Guide

What most people notice first about 95 Broad Street is its fabulous color -- that of a red-orange poppy. The paint seems to breathe instead of looking flat and uniform because the house has been "limewashed," an old European method of painting where lime is mixed with earth pigments for color. The paint works particularly well over absorbent surfaces such as stucco and brick. The effect particularly appeals to me as an artist.

95 Broad Street was constructed in 1770, a sturdy Georgian-style house with exceptional interior moldings probably carved by one of the master craftsmen brought over from England to work on St. Michael's Episcopal Church, just a few doors down, which opened in 1763. Peter Bocquet, Jr., a plantation owner and deerskin trader of Huguenot heritage, built 95 Broad on land his father gave him.

Notice the graceful wrought iron balcony on the second floor. This balcony is believed to be original to the house. Charleston is fortunate to have as much ironwork left as we do because most of our original ironwork was melted for cannon during times of war. Though wrought iron appears much more fragile than cast iron, it is actually the opposite. Cast iron is more fragile simply because the more elaborate designs are cast in molds and are therefore breakable. The Bocquet house ironwork is lovely with its "C" scroll designs.

Bocquet lived in Charleston during the Revolutionary War, one of the most volatile periods in our history. He was a patriot and a member of the Second Continental Congress, a member of the South Carolina Militia, and he was captured in 1780 at the Siege of Charles Town. Bocquet, along with other Charlestonians, was sent to Philadelphia and imprisoned there for the remainder of the war. After the Revolutionary War, Bocquet returned home and became active in South Carolina government, serving on the Governor's Privy Council and as the Commissioner of the Treasury.

If you're in the vicinity of the Four Corners of Law, stroll west down Broad Street to get a good look at 95 Broad Street. It's definitely worth going out of your way!