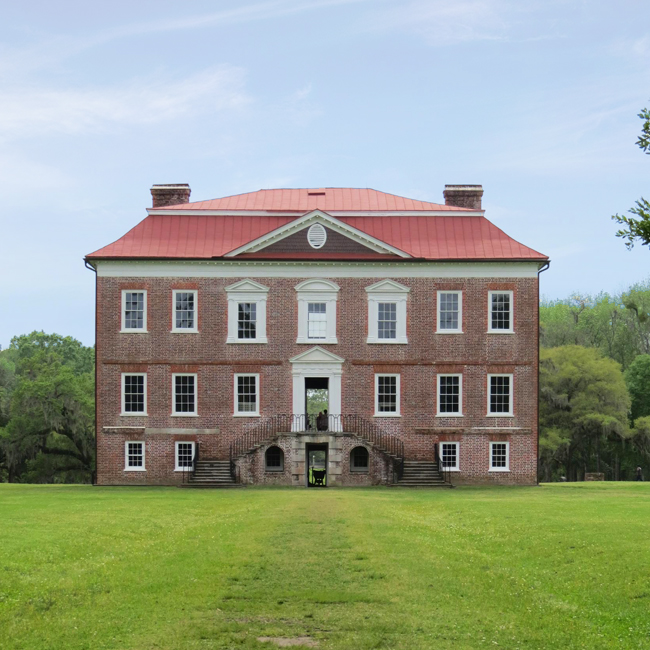 Written by Amelia Whaley. 06 May 2019 Posted in Diary of a Charleston Tour Guide

This week we go further afield and drive out to scenic Highway 61. There are three major plantations located on this highway along the Ashley River that are open to the public: Magnolia Plantation, Middleton Place, and Drayton Hall.

Of these plantations, Drayton Hall has the only plantation house that was not destroyed by Union forces as they burned their way into Charleston at the end of the Civil War. Supposedly, rumors that the house was being used as a hospital for highly contagious people was enough to totally discourage the Union forces from getting close enough to discover whether the patients were Confederate or Union troops.

In any event, Drayton Hall was spared the burning, and life went on, albeit with massive changes, until 1974 when the plantation was purchased by the National Trust for Historic Preservation. I have always admired the Drayton family for their courage in selling the family "seat" to the National Trust, which has enabled the property and house to be preserved and the stories of the Draytons and the enslaved people who lived there to unfold.

In 1676, two families, the Draytons and the Foxes, came from Barbados to Carolina on the same ship. Stephen Fox's daughter Ann and the Drayton's eldest son Thomas met and married. Fox held a large land grant on the Ashley River, now known as Magnolia Plantation and Gardens, which he gave to the young couple.

Ann and Thomas Drayton had several children, one of whom was John Drayton. Since the law of primogeniture followed the English to Carolina, John's eldest brother would inherit Magnolia. John later purchased substantial acreage next to Magnolia's holdings on the Ashley River and by 1752 had completed the plantation house known as Drayton Hall, a building many consider to be the finest example of Georgian Palladian architecture in America.

Drayton Hall has never had any running water or electricity, and, where needed, the National Trust has preserved, stabilized, and repaired this important example of mid-18th century American architecture.

When I first visited Drayton Hall several years after it was sold to the National Trust, the offices were in a small trailer. It has been exciting to see the history of the property and its inhabitants, both black and white, unfold over the years, culminating in the new Visitor Center that opened a year ago.

In many ways, Drayton Hall is a microcosm of the history of Charleston and the Lowcountry. The history is not stagnant. On the contrary, our history and that of Drayton Hall and its people are like the layers of an onion. There is always more of the story to peel away.

If you've never been to Drayton Hall, I encourage you to visit. If you visited before April of 2018, treat yourself and go back. The new Visitor Center has excellent exhibits, a gift shop, and a small, rustic sandwich shop.

Next week, we will continue to explore Charleston history though her places and people.