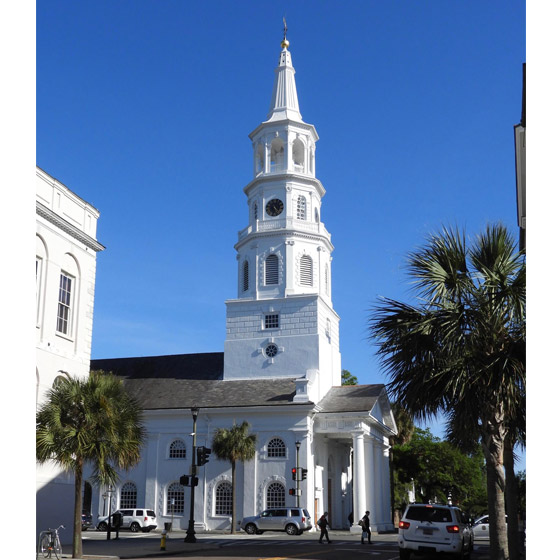 The Four Corners of Law: St. Michael's Church Part I

Written by Amelia Whaley. 04 June 2018 Posted in Diary of a Charleston Tour Guide

This week we'll visit St. Michael's Anglican Church, 80 Meeting Street, at the fourth Corner of Law. St. Michael's represents God's Law. There has always been a church at this site since Charles Town settled the peninsula in 1680.

If you read the buildings at the Four Corners of Law, you will see that the top of City Hall is not as tall as the top of the Old State House. The United States Post Office has a tower that is much taller than either city Hall or the Old State House. However, the tower is not as tall as St. Michael's steeple, because "nothing is higher than God's Law."

The first church at this site, built of wood in 1680, was St. Philip's Church, the mother church of Anglicanism in Carolina. Although Charles Town afforded the widest degree of religious tolerance in the world in 1670, it was still an English settlement with Anglicanism as the state religion here.

In the late 1720s, St. Philip's Church moved to Church Street. Eventually, the Anglican parish was divided into two and St. Michael's was built at the present site, opening its doors to worshippers in 1761. St. Michael's is the oldest church building on the peninsula.

There was no one architect for St. Michael's. Samuel Cardy was the master builder, Humphrey Sommers was one of the contractors, and the magnificent carving was done by several carvers originally from England.

The Tuscan columns and massive doors create an imposing entrance and reinforce the solemnity and respect with which to approach the sacred space.

The steeple, 186 feet high, has been used as a watch tower over the years, especially during wartime. The clock was imported from London in 1764 and electrified in 1946. During the Great Earthquake of 1886, the steeple fell eight inches and the clock stopped.

The bells, also imported from London in 1764, were cast at the same foundry in London where the Liberty Bell was cast. The British stole the bells in 1782, but they were finally returned to Charleston. During the Civil War, the bells were sent to Columbia for safekeeping, but were burned when Sherman marched through Columbia. Enough metal was salvaged that the bells were recast at the same foundry in London where they had been cast originally.

Many who visit Charleston at Easter attend the Easter services at St. Michael's, but it's important to come early. As a member of St. Michael's when I lived downtown, I've had to sit on the floor in the balcony on Easter Sunday because there were no seats left!

Join me next week as we visit the interior of St. Michael's Church.