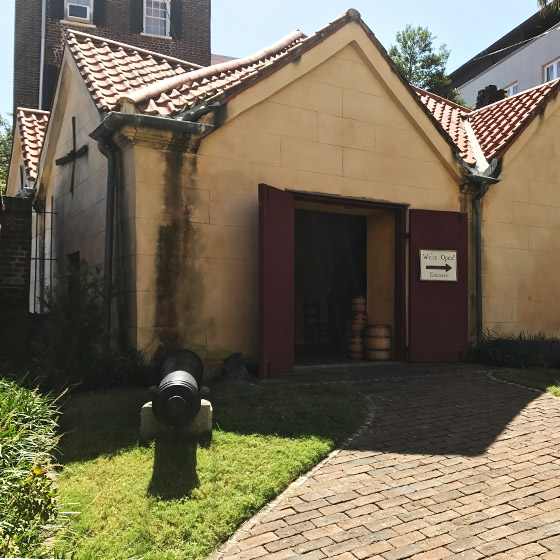 Written by Amelia Whaley. 12 October 2017 Posted in Diary of a Charleston Tour Guide

Built in 1712, the Powder Magazine located at 21 Cumberland Street is the oldest public building still surviving in Charleston. It is also, in my opinion, the most medieval-looking building in Charleston -- a relatively small, thick, stuccoed building with a vaulted roof of pan tiles.

One look at the Powder Magazine and I am transported to an earlier age when Charles Town was one of three walled cities in North America, with Quebec and St. Augustine being the other two. In fact, the Powder Magazine was built close to the edge of the northernmost wall, which was made of earth extracted from digging the moat below. Three of the city's walls were made of earth and completed in 1704; the fourth, seaward wall, made of local brick, was built on the Cooper River side in 1696.

Constructed to store the new settlement's gunpowder, the walls of the Powder Magazine are three feet thick, and sand is packed between the roof and the vaulted ceiling. This way, the building wold hopefully absorb any gunpowder explosion.

By 1746, the Powder Magazine had ceased to be used to store gunpowder; that purpose was resurrected during the Revolutionary War. After the Americans won the Revolutionary War, the Powder Magazine was never used again for gunpowder storage. The last of the city walls had come down, and Charles Town continued to expand. The city was now more populated, and the people living nearby were apprehensive that if the gunpowder blew up, their lives and homes would be in danger. Through the years, the building fell into a state of disrepair.

Between the end of the American Revolution and the middle of the 19th century, the Powder Magazine was used for various purposes, including its use as a wine cellar for the Manigault family. In 1902, the building was purchased, solely for its historical importance to the City of Charleston and the United States, by the South Carolina chapter of the Colonial Dames of America. The building was eventually renovated and opened as a museum.

There is an entrance fee to the Powder Magazine today, but a visit is worth far more than its cost. This is the best way to visualize the walled city, the threats to the early settlement, and the wars fought to defend the city. There is an interactive, three-dimensional map of the walled city that helps visitors understand the topography, size, and layout of the walled city. The history and gunpowder exhibits are excellent and interesting, and the staff is involved and helpful.

The Powder Magazine is an experience for all ages. There is plenty to keep school children, parents, and educators engaged and interested, and even the grandparent generation enjoys the Powder Magazine. When I dropped in the other day to see what was new, it was a school day and the children were sparse, but the older generation was on site, taking the time to go through the exhibits and even in engage in some of the interactive offerings. Enjoy history as it comes alive at the Powder Magazine!