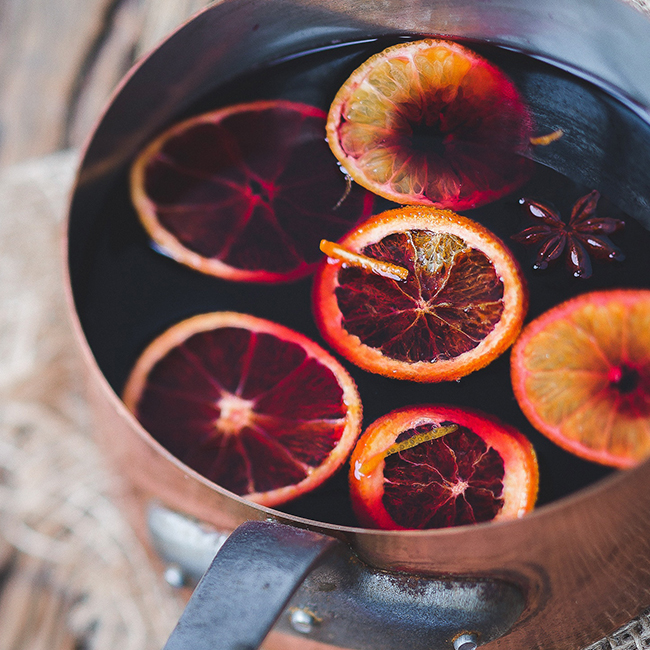 5 Grown-Up Drinks to Keep You Warm This Holiday Season

There’s nothing more comforting in the winter chill than sitting around a fire with warm drinks and good friends or family. Here is our list of our favorite classic (and not-so-classic) drinks to warm you up this holiday season.

1. Mulled Cider: This quick and easy favorite is one that everyone in the family can enjoy. All you need is apple cider (you can make your own or find a premade bottle in most grocery stores), cloves, cinnamon sticks, star anise, an orange, and maple syrup. The spices can be added to taste, but here is what we recommend for four servings:

First add the cider to a medium-sized saucepan and bring to a boil. Then add your spices and orange zest, remove from the heat, add the maple syrup, and stir. Strain the hot cider into mugs in order to remove the pieces of cinnamon, clove, etc. If you’re feeling fancy, garnish your mugs with clove-studded orange wedges. To make this cider a little more grown-up, add a splash of spiced rum or bourbon to the mug before serving.

2. Mulled Wine: Mulled, or spiced, wine is one of our absolute favorite cold-weather drinks, so if you’re only going to make one of the drinks on this list, this should be the one. And it’s a lot easier than you might think. Just gather together a bottle of your favorite red wine, cloves, star anise, cinnamon, nutmeg, an orange, some honey, and a splash of apple cider. Again, you can add as much or as little spice as you’d like, depending on how “wine-y” you like it, but our recommendation is:
- 1 bottle of red wine
- 6 cloves
- 2 star anise
- 2 cinnamon sticks (You can use ground cinnamon in a pinch, but be extra sure to strain the liquid before you serve. Believe me, getting a mouthful of cinnamon at the end of a great mug of hot wine is not ideal.)
- 1/2 of an orange, zested and sliced
- ¼ cup honey
- 4 cups apple cider

Combine everything in a large saucepan and bring to a boil. Then lower the heat and let it simmer for a few minutes to let all the flavors come together. Strain out all those pieces (or cinnamon powder), and pour into your favorite mugs. Add a twist of orange peel just for fun.

3. Rum Chai Hod Toddy: This next drink is a twist on the classic Hot Toddy. Usually, a hot toddy is made with whiskey, water, lemon, various herbs and spices, and honey, and has historically been used to relieve the symptoms of a cold or the flu. This version, however, uses spiced rum and chai tea to give it more of that holiday feel.
- 4 to 6 oz chai tea
- 1 oz or 2 tbsp spice rum
- 1 tbsp honey
- ¼ lemon
- Cinnamon

First make the chai tea (you can do this with tea bags or loose tea leaves if you prefer), and add the spiced rum. Stir in the honey and lemon juice and finish with a dash of cinnamon.

4. Orange Brandy Hot Chocolate: Another twist on an old favorite, this version of hot chocolate is sure to impress your holiday dinner guests. What you’ll need for each cup is:
- 8 ounces of hot chocolate
- 2 ounces of orange brandy
- 2 dashes of orange bitters, optional
- Whipped cream
- 1 orange, for zesting

For the hot chocolate, you can use store-bought instant or you can make your own (here’s a recipe). Once you have that ready, stir in the orange brandy and bitters (if you’re using those). The recipe we used says to “Top with a dollop of whipped cream, then eat a few spoonfuls of whipped cream if no one is looking.” I’m not gonna say no to that! After that, sprinkle a little orange zest over the top, and voila!

5. Wassail: This may be the most intricate recipe on the list, requiring both an oven and about an hour of prep time, but this traditional Yuletide punch is worth the effort it takes to make. This particular recipe comes from chef Alton Brown, and his ingredients include:

He says to first preheat the oven to 350 degrees F. Then,
“Put the apples into an 8 by 8-inch glass baking dish. Spoon the brown sugar into the center of each apple, dividing the sugar evenly among them. Pour the water into the bottom of the dish and bake until tender, about 45 minutes.
Pour the ale and Madeira into a large slow cooker. Put the cloves, allspice, and cinnamon into a small muslin bag or cheesecloth, tied with kitchen twine, and add to the slow cooker along with the ginger and nutmeg. Set the slow cooker to medium heat and bring the mixture to at least 120 degrees F. Do not boil.
Add the egg whites to a medium bowl and using a hand mixer, beat until stiff peaks form. Put the egg yolks into a separate bowl and beat until lightened in color and frothy, approximately 2 minutes. Add the egg whites to the yolks and using the hand mixer, beat, just until combined. Slowly add 4 to 6 ounces of the alcohol mixture from the slow cooker to the egg mixture, beating with the hand mixer on low speed. Return this mixture to the slow cooker and whisk to combine.
Add the apples and the liquid from the baking dish to the wassail and stir to combine. Ladle into cups and serve.”

The word “wassail” comes from Anglo-Saxon (and/or possibly Old Norse) origins and literally means “be hale” or “be healthy.” So here’s to you, and wassail!

These are just a few of our favorite warm holiday drinks. So try out any or all of these recipes this holiday season and let us know which ones you like! And if you have any recipes you’d like us to try, like us on Facebook and let us know!