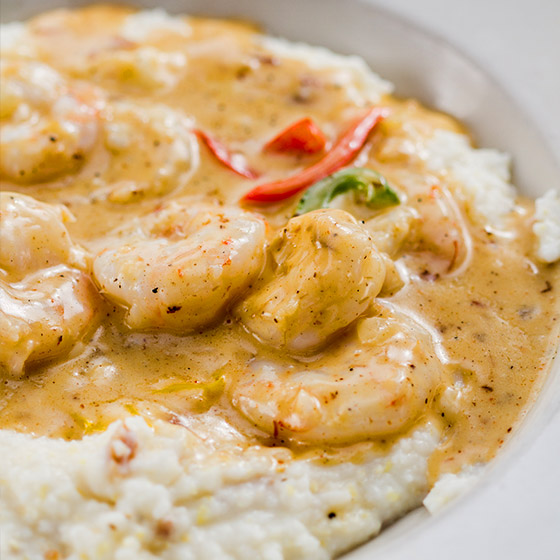 All Shrimp and Grits Are Not Created Equal

These 10 Do It Their Way

Whether you are a native, a transplant or a visitor to the Holy City, the fact that Charleston is known for its shrimp and grits is basic information. Yet, those foodies who are in the know realize that often the only two ingredients prevalent in every restaurant's offerings are SHRIMP and GRITS. After that, local chefs often let their imagination run wild.

1. Shrimp and grits du jour ... The Glass Onion in West Ashley always has this Lowcountry staple, but it can vary by the day and certainly by the season. My last visit there featured a delicately prepared classic version with wild Atlantic shrimp, andouille sausage and braised vine-ripe tomatoes over Geechie Boy Grits. Don't be surprised to see the dish augmented by root vegetables or green veggies, depending upon the time of year. The one constant: deliciousness!

2. Early and often ... Just down the road in West Ashley, the eclectic Early Bird Diner lets you decide: "fried with sweet and and spicy jelly or sautéed with tomato bacon gravy." Served with one of their ridiculously good biscuits, this house specialty is available from breakfast through late night. My suggestion: sautéed for breakfast and fried for dinner in the same day!

3. France meets John's Island ... It's no secret that I love the Fat Hen. This dish is just one more reason. The keys to their shrimp and grits... Tasso ham AND bacon AND heavy cream AND peppers and onions. They even post their "can't miss" recipe on their website. As for me, I'm not going to even try to match their magic at home.

4. Say cheese ... The Hominy Grill, in the Cannonborough section of the city of Charleston, is known throughout the South for its interesting take on Charleston classics. Would I endure that line out the door if I didn't share that opinion, especially regarding their shrimp and grits? Sautéed with mushrooms, scallions and bacon, how can you beat tender shrimp served over buttery cheese grits? The simple answer: you can't.

5. The Island way ... Daniel Island's Islander Restaurant knows the secret is simple and homemade. Their house-made Tasso ham and their unique bacon Parmesan grits make all the difference. Yes, bacon Parmesan grits!! Add local shrimp and a gravy delicately concocted with sweet onions and peppers and you've got a winner. A hint: it tastes even more luxurious under the stars on their patio!

6. Shrimp and soul ... Sunday is Shrimp and Grits Day at Jestine's Kitchen in Downtown Charleston. Spectacular Southern soul food six days a week can't top their Sunday special. Intentionally soupy in texture, this delicacy features meaty-tasting brown gravy, onions and roasted red peppers. The biggest challenge: deciding which two incredible sides should accompany your shrimp and grits. Go for the collards and the okra gumbo. Now, you're all in!

7. The 7 from Heaven ... We may not be able to agree on who serves up the best shrimp and grits in the area, but we can agree on who offers the most variety. If you are on Isle of Palms, it's easy to decide where to eat. That's the Acme Lowcountry Kitchen. As for which of the 7 shrimp and grits options to choose from, I suggest their Whistle Stop version with fried green tomatoes and sautéed shrimp atop pimento cheese grits! That just says Charleston, doesn't it?

8. A toast to Toast! ... With 3 Charleston-area locations, including Summerville, I love Toast's unique take on shrimp and grits! They start like many others do, with sautéed shrimp, tomatoes, onions, peppers and Tasso ham. But it gets interesting from there. They then deglaze with white wine and serve it all with a lobster cream sauce over grits. As a former Maine resident, they had me at lobster. What about you?

9. Bourbon? Yep! ... The Screen Door in James Island offers up their version of Southern Shrimp and Grits for dinner or Sunday brunch. And well they should! Roasted corn, peppers and shallots add a nice touch to their delicate, yet flavor-packed preparation. What puts it over the edge? Their bourbon cream sauce adds just the right amount of kick. I'm a believer, now!

10. The Ms doesn't miss ... Sweet shrimp and andouille sausage in a wonderful creamy confit tomato and Tasso ham gravy served over pimento cheese and green onion stone grits. The Original Ms Rose's on Sam Rittenberg Boulevard does it right! It gets even better when you bite into the grilled corn bread that accompanies it. All rise for Ms Rose!

One more, just because ... How can you leave out a downtown restaurant that combines sweet shrimp, country ham, fennel and crispy Brussels over cheddar grits and recommends topping it with a fried egg? I certainly can't. You shouldn't either. Add The Darling to your list. Just as I have.

In closing, I suggest that you make shrimp and grits a Sunday tradition! In three months or so, you can announce your favorite...if you can. I know I can't, at least not yet. The good news is we don't have to...there's always next Sunday!