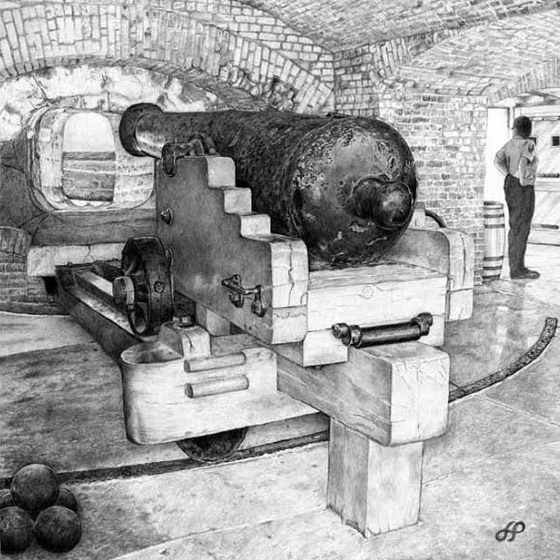 This is where it all began -- the site of the opening battle of the deadliest war in all American history. The estimated 620,000 to 750,000 soldiers and sailors who perished make it deadlier than ALL other American conflicts COMBINED. Thirty per cent of all men of South Carolina who served from 1861-1865 did not survive.

It should come as no surprise as a visitor in Charleston (any more than in Honolulu and Pearl Harbor) when someone speaks about "the war," they believe you understand which one they are referring to. And if you need to ask someone which one, well then, they know you're not from around here!

Fort Sumter National Monument is, every year, the most visited location in our state. When you stand in the center of the parade ground, you are precisely at ground zero. Directly above your head the first shot exploded, over the most historically important outdoor acre of real estate anywhere in the United States.

And it's where my story began -- my love affair with history in general and, with that, of my hometown and America's most historic city, in particular. Why I'm a tour guide today.

You see, when I was growing up this was a completely different city from what visitors find today. The economy was wrecked in 1865, then came hurricane and earthquake on top of fire and bombardment, and Charleston did not fully recover for more than a century. Unlike today, publications like Conde Nast and Travel + Leisure were not writing about Charleston and giving us their top ranking. We were still "America's Best Kept Secret" for the few visitors that came in the spring ("tourist season" at the time). And nobody was writing about us.

And yet, when my parents took us to the Battery on Sunday afternoons, I could look three miles over the water and there at the entrance of the harbor could see Fort Sumter, every bit as important as things everybody in the United States did know all about in the 1960s, like the U.S.S. Arizona at Pearl Harbor. This was really big to a little boy. Someplace far away and exciting like that, right here in my sleepy little town that nobody ever talked about?

Things have changed, but for me the thrill when I arrive at Fort Sumter has never diminished. Out of all the many types of tours I give to visitors, it's still my favorite and also, the one in which locals are most likely to learn things they never knew before. Not the "what" and "when" people already know, but the "why" and the many stories of the real-life people who became the "who" of our collective saga as Americans. And as a local artist, it's truly a point of personal pride that reproductions of my drawing are available for purchase at its Visitor Center.

Even if you never make it out to the Fort, the stories are still fascinating at the Battery from where I first glimpsed them.

Won't you join me sometime?