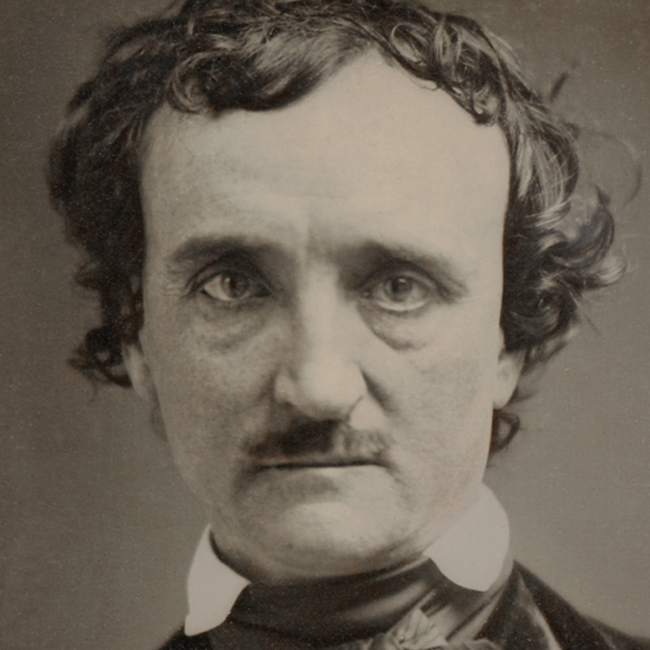 Written by A Guest Writer. 21 October 2019 Posted in Arts & Culture

When it comes to Charleston’s history, the line between fact + fable tends to get a little murky. That’s especially the case when it comes to chronicling the time Edgar Allan Poe, a man who relished in the mysterious, spent here.

The trailblazing American writer + poet died on Oct. 7, 1849 (170 years ago this month)– and, just like his life, his death is shrouded in mystery. He was discovered lying in a Baltimore gutter in what a witness describes as being “in great distress.” He was taken to a hospital, where he succumbed to his ailments days later– but he was never coherent enough to describe what exactly those ailments were.

Two days after Edgar Allan Poe died, “Annabel Lee” was published. The narrator of the poem describes his love for a woman named Annabel Lee who lives ‘in a kingdom by the sea.’ The poem describes the pair as falling in love in their youth, and sharing a bond so pure that it is envied even by angels in Heaven. Annabel Lee dies, but his love for her does not. He dreams of her every night, and believes their souls share an unbreakable bond.

Long before achieving fame as an author, a teenage Poe took up temporary residence on Sullivan’s Island. Starved for cash, he lied about his age + enlisted in the U.S. Army under the name Edgar A. Perry. From Nov. 1827 to Dec. 1828, Poe was stationed at Fort Moultrie, serving in Company H, 1st U.S. Artillery Regiment. During that time, he rose from the rank of private to regimental sergeant major. He was discharged from the military a year later, where he embarked on a failed attempt to attend West Point.

In his short story, “The Gold Bug,” which takes place on Sullivan’s Island, he describes the area as such: “This island is a very singular one. It consists of little else than the sea sand and is about three miles long. Its breadth at no point exceeds a quarter of a mile. It is separated from the mainland by a scarcely perceptible creek, oozing its way through a wilderness of reeds and slime, a favorite resort of the marsh hen. The vegetation, as might be supposed, is scant or at least dwarfish. No trees of any magnitude are to be seen. Near the western extremity, where Fort Moultrie stands and where are some miserable frame buildings, tenanted, during summer, by the fugitives from Charleston dust and fever, may be found the bristly palmetto; but the whole island, with the exception of this western point and a line of hard, white beach on the seacoast, is covered with a dense undergrowth of the sweet myrtle…” – Excerpt from “The Gold Bug,” shared via Sullivan’s Island Homes

Other than that, we don’t know much about where Poe went while he was stationed on Sullivan’s Island– but you won’t be as hard-pressed to find local spots that celebrate his stay. There’s Poe’s Tavern, an Edgar Allen Poe-themed restaurant right on Center Street, and the Charleston County Public Library branch on SI calls itself the Edgar Allen Poe Library.