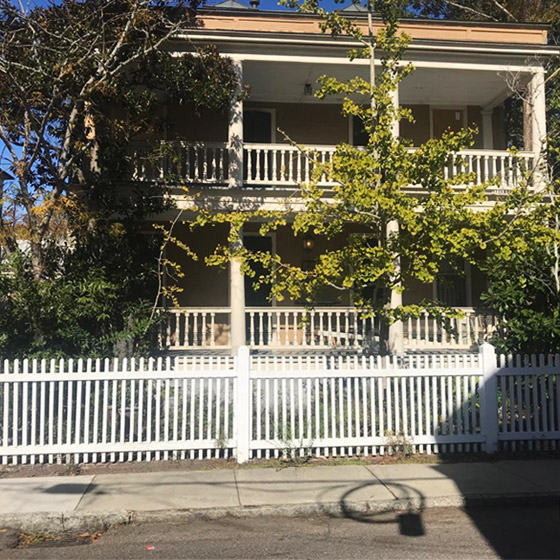 Written by Amelia Whaley. 27 November 2017 Posted in Diary of a Charleston Tour Guide

Originally owned by Frederick Grimke, who built the tenements at 55 King, 102 Tradd became the home of the Frasers; Grimke's daughter Mary married Alexander Fraser and they lived here with their children. One of their sons, Frederick, scratched part of his name and the date (1774) into one of the window panes. Frederick raised his much younger brother Charles, the artist, after their parents died in 1791.

Charles later moved to 55 King Street, but the Fraser family retained ownership of 102 Tradd until 1847 when Dr. Hopson Pinckney bought the property. The property was in extremely bad shape, and Pinckney made extensive renovations. In fact, the original construction was closer to the corner of Tradd and Orange Streets; it was situated as a typical Charleston single house so the door would have been on the side facing Orange Street. Pinckney actually had the house turned so that the door now fronts on Tradd Street. He also replaced the piazzas and updated parts of the interior in the Greek Revival style.

An interesting side note is 102 Tradd Street's relationship to the first Roman Catholic church in Charleston, St. Mary's at 89 Hasell Street. Although the proprietary colony Carolina afforded the widest degree of religious tolerance in the world in 1670 when Charles Town was founded, the one religious group not embraced was Roman Catholicism. England had been embroiled in religious turbulence between the Roman Catholics and Protestants during the reigns of Mary and Elizabeth Tudor, and Protestantism emerged victorious. Spain, a primarily Roman Catholic nation, had been an enemy of England for years, and in North America, the Spanish were a major enemy to Charles Town during its first 50 years. The Roman Catholics were assumed to be Spanish spies and therefore not welcome in Charles Town.

In any event, there is a legend that the first Catholic mass in Charleston was held at 102 Tradd in 1786 when a Roman Catholic priest was traveling through. Further, that mass was supposedly the beginning of St. Mary's Church, which was formally established in 1789.

Along with the legend comes the mystery... Why would the Catholic mass be celebrated at 102 Tradd at a time when the Frasers were living there? Especially since the Frasers were Protestant...

There are always more stories and mysteries to uncover as we continue down Tradd Street and throughout the city. That's part of what makes Charleston so much fun!