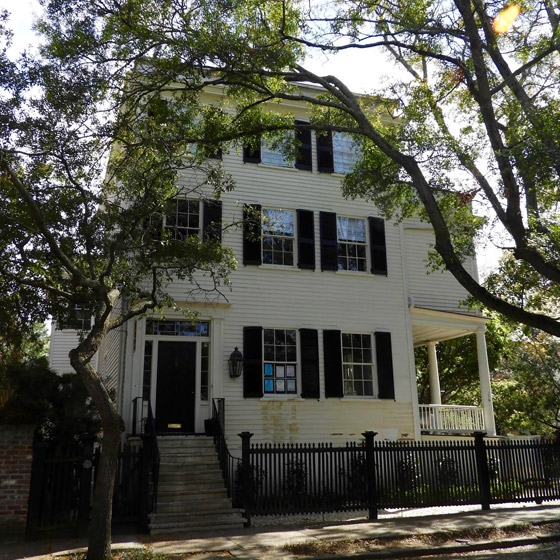 Written by Amelia Whaley. 19 March 2018 Posted in Diary of a Charleston Tour Guide

Still wandering around Ansonborough, this week we explore 57 Laurens Street, built around 1836 in the Greek Revival style. Two years after this house was built, the fire of 1838 wiped out most of the Ansonborough houses; fortunately, 57 Laurens and several of the homes around it escaped the blaze.

The stairs leading to the front door are marble. The house itself is three stories and constructed of black cypress, wood that is impervious to termites and native to the Lowcountry. The interior boasts three fireplace mantles made of black marble, double parlors and pine floors. Additionally, the large lot includes a three-story kitchen dependency built after the fire of 1838; prior dependency buildings at 57 Laurens were burned down during the fire.

Both exterior and interior easements were granted to the Historic Charleston Foundation by one of the owners, insuring that the integrity of the house, inside and out, is protected. Future owners must abide by these easements.

57 Laurens was built by Augustus Taft, and yes, he would have been related to President William Taft. Perhaps old New England, where the Tafts were from, shares Charleston's sentiment of "everyone around here is related; it's just whether or not you claim each other."

After Augustus Taft's death in 1881, the property was inherited by his daughter, who married Pierre Gaillard Stoney. For a brief few months in 1865 during the beginning of Reconstruction, 57 Laurens was used to house freed slaves.

57 Laurens is another good example of the houses that would have made up the Ansonborough neighborhood before the 1838 fire. As we can se from this and the last two posts, the lots, architecture, and dependency buildings show a quite well-to-do area of Charleston that is north of the old walled city.

We will continue our Ansonborough journey next week.