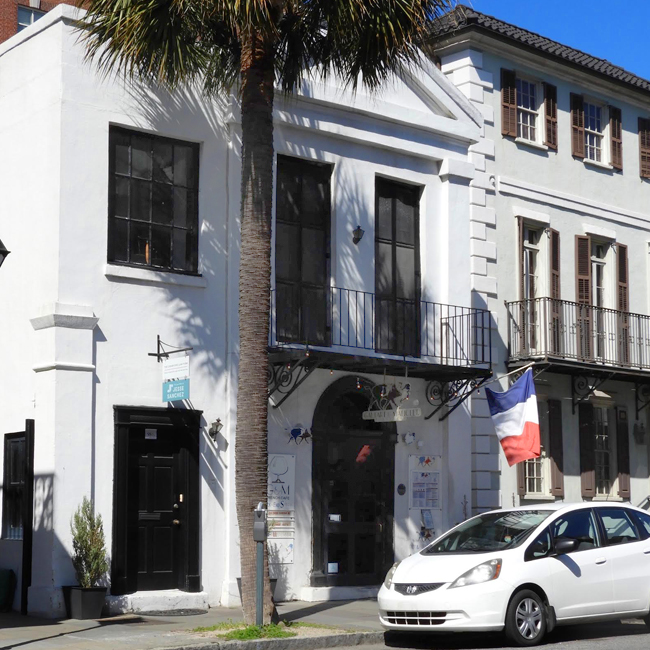 Written by Amelia Whaley. 29 April 2019 Posted in Diary of a Charleston Tour Guide

Welcome to 98 Broad Street, a small building next door to the Charleston County Judicial Center. Notice the French flag in the photo; 98 Broad has been home to Gaulart & Maliclet Café, a small French restaurant, since 1984. G&M, known to locals as "Fast & French," is a favorite restaurant for many Charlestonians, especially during lunchtime to those employed near Broad Street.

Perhaps that glass of French wine accompanying many a lunch special could be described as "medicinal," and thus reminiscent of 98 Broad's past ownership by physicians. It is believed that the rear of the present building dates to approximately 1735, when Dr. John Martino built it. The next owner was Dr. Alexander Garden, a Scottish physician who immigrated to Charles Town and also had a plantation called Otranto near present-day Goose Creek.

Dr. Garden was also a botanist, and the gardenia (Gardinia jasminoides) is named after him. This Alexander Garden is the second by that name in early Charles Town. His distant relative, also Alexander Garden, was an Episcopal minister at St. Philip's Church, having been sent to Charles Town in 1719 by the Bishop of London. Each eventually returned to England. Our Dr. Garden who owned 98 Broad Street was sympathetic to the British cause during the American Revolution and, as a result, had his property confiscated, and he left America at the end of the war.

The next physician owner of 98 Broad is Dr. Henry Frost, who used the building as his medical office and surgery. Research indicated that Dr. Frost remodeled the front part of the building around 1835, two years before he built his house nearby at 102 Broad Street.

Dr. Frost was one of Charleston's distinguished physicians. He was also a professor for over forty years at the Medical College, now known as the Medical University of South Carolina over on Ashley Avenue. Frost also served in the Civil War as an Assistant Surgeon for the Confederacy.

Another physician owner was Dr. William Horlbeck Frampton. When early 19th century Belvedere Plantation near Charleston was demolished in 1925, Dr. Frampton was instrumental in acquiring some of Belvedere's woodwork and installing it in 98 Broad Street.