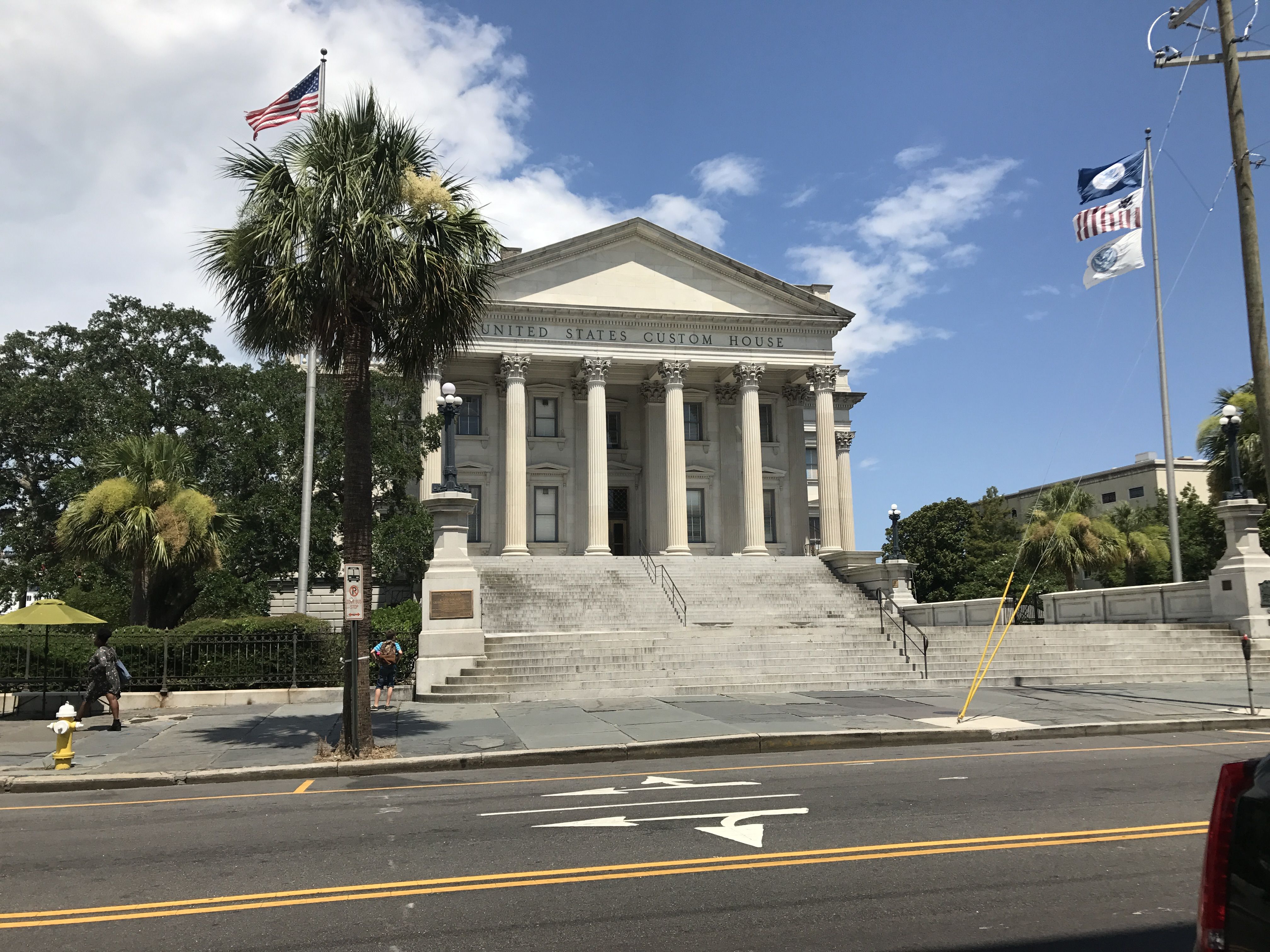 Written by Amelia Whaley. 19 June 2017 Posted in Diary of a Charleston Tour Guide

The Custom House at 200 East Bay Street is, in my opinion, the premier landmark in historic downtown Charleston. One of our city’s most imposing public buildings, almost everyone is familiar with it, making the Custom House great to use as a reference point.  When meeting someone there, it’s wise not to stipulate “front” or “back,” which can be confusing since both entrances appear identical.  It’s much better to say the “Cooper River side” or the “East Bay side.”

The Custom House is a federal building, open to the public on weekdays.  If you’ve got the time, I suggest you climb the outside stairs to the main floor (the other floors are not open to the public).  The main floor, designed like a cortile, similar to an indoor courtyard, is beautiful. There are some places to sit and rest your feet, but the furnishings are sparse which I think emphasizes the grandeur of the interior.

The site itself has a vital link to the early walled city of Charles Town; the modern Custom House is situated on the former site of Craven’s Bastion at what was the northeast corner of the walled city.  After the Old Exchange Building ceased being used as the U.S. Custom House, the federal government bought the site in 1848 to construct the new Custom House. At that time, the site was being used as a wharf.

The government originally hosted a competition for the building’s design. Ammi Young, the first Supervising Architect of the Treasury, a newly created federal position, ended up taking elements of four of the submissions to create the design. Young’s final design was later modified due to finances and other reasons.  In fact, the construction of the Custom House is a classic case of “life being interrupted.”  The Custom House took 30 years to build; begun in 1849, the building was not completed until 1879 because of the Civil War.  Additionally, what had already been constructed before the war was damaged by shelling.

The building came under a different but no less dangerous attack when it was slated for demolition in 1956.  However, due to preservation and political efforts, the Custom House was saved, restored in 1968 and placed on the National Register of Historic Places in the 1970s.

One of my favorite aspects of the Custom House today is its use for outdoor concerts.  In particular, the Piccolo Spoleto Festival usually has a free concert here the evening of the opening day (the Friday before Memorial Day).  Called the “Sunset Serenade” and performed by the Charleston Symphony Pops, this is a great way to start the arts festival!