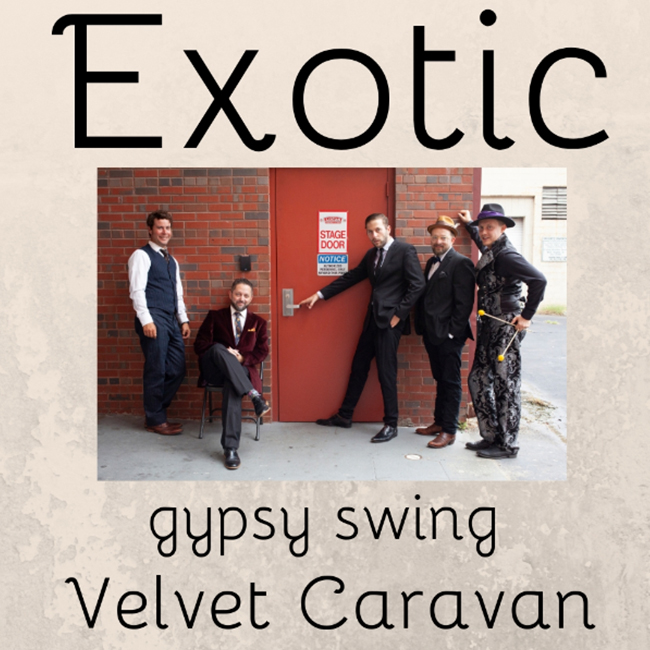 What Song is This?

There is something simultaneously exotic, passionate and downright swinging about gypsy jazz. That's the all-strings musical style that guitarist Django Reinhardt and violinist Stephane Grappelli popularized with their Hot Club of France collaborations in the 1930s and '40s, but back then, they didn’t call it gypsy jazz. It was simply a small group of musicians led by Reinhardt playing the guitar in his uniquely superb style accompanied by the amazingly talented Grappelli on the violin. The combo was a grand slam.

If there is a small, sweet, big bang, theory of this sound and style of music it must begin with the talent of Django Reinhardt (January 10, 1910 – May 16, 1953). A Belgian-born Romani-French jazz guitarist and composer, regarded as one of the greatest musicians of the twentieth century, Django Reinhardt was the first jazz talent to emerge from Europe and remains the most significant. Reinhardt was attracted to music at an early age, first playing the violin. At the age of 12 he received a banjo-guitar as a gift. He quickly learned to play, mimicking the fingerings of musicians he watched. After hearing ragtime and Dixieland music, Reinhardt began listening to Duke Ellington, Joe Venuti and Eddie Lang, and especially Louis Armstrong. From that point on, he dedicated himself to playing in the jazz style on his guitar. Reinhardt was able to make a living playing music by the time he was 15. Living with his family on a Romani settlement near Paris, he received little formal education and acquired the rudiments of literacy only in adult life.

Not long after joining his first formal band with British bandleader Jack Hylton, Reinhardt nearly died. On the night of November 2nd, 1928, he knocked over a candle inside the wagon in which he lived with his wife Bella. The extremely flammable celluloid that his wife used to make artificial flowers ignited, and the wagon went up in flames. The couple was able to escape, but Reinhardt was badly injured, suffering burns over half his body. The fourth and fifth fingers of his left hand were also badly burned, which made it nearly impossible to play the guitar. Applying himself to the intense relearning of his craft, Reinhardt regained his musical mastery by focusing on his left index and middle fingers, using the two injured fingers only for chord work.

After Reinhardt met violinist Stéphane Grappelli, they played together informally when they weren't playing dance music with a small orchestra at the Hôtel Claridge in Paris during the summer of 1934. According to an account in a book by Michael Dregni, Grappelli played a chorus, then Reinhardt began to improvise. Sometimes they were accompanied on double bass by Louis Vola, the band's leader, and on rhythm guitar by Reinhardt's brother Joseph. This was the core of Reinardt's band. The addition of Roger Chaput on rhythm guitar made it the Quintette du Hot Club de France. This classic lineup, with occasional changes in membership on double bass and rhythm guitar, entered the recording studio later that year. They recorded extensively until the outbreak of war in 1939 when the Quintette was on tour in England. Reinhardt returned to Paris while Grappelli remained in London for the duration of the war. After the war, they reunited in London and recorded with an English rhythm section. The days of the hot club sound were over, as both men had pursued independent musical paths.

The Hot Club style formation saw a revival in the public eye in the 1970s/80s. It is perhaps at this point that journalists coined the term Gypsy Jazz, Gypsy Swing, Jazz Manouche, or whatever variation that may exist.

Ricardo Ochoa is a classically trained violinist and leader of the band named Velvet Caravan, playing in the style of what is today known as gypsy jazz. Ochoa has gathered talented Savannah, GA musicians to create their own branch on this tree of jazz. Since its beginning in 2014, Velvet Caravan’s journey has continued to gain momentum, as its reputation for top-notch virtuosity and unforgettable live shows has become the band’s unique global brand. Standards, pop, rock, hip hop, and original songs are all fair game for this high intensity ensemble. Velvet Caravan’s unique ability to subtly shift musical gears without sacrificing their integrity as composers and performers is rare indeed. This versatility has resulted in an envelope-pushing group that’s just as successful at dazzling jaded cocktail drinkers as they are at commanding the rapt attention of serious music aficionados in whisper-quiet recital environments. This band is the real deal. Not only are they excellent musicians, they are also excited to hear other excellent musicians at play. Have you ever gone to a performance and can sense in your soul that the artist, whom you’ve paid to watch, is having more fun than anyone in the room? That’s how it feels to watch this band making music. They love what they do.
The sound made when combining Velvet Caravan’s chosen instruments, although originally inspired by the sound of American jazz, is truly exotic. Their music is like a vapor of exciting mystery. It’s different and unusual. It’s hot as blazes one moment and haunting the next. On April 28, 2019, The Flowertown Theatre in Summerville, SC will play host to the silver-tongued style of Velvet Caravan.

On April 28, 2019 @ 3:00 – 4:30 pm VELVET CARAVAN will be performing at The Flowertown Theatre in Summerville. This historic theatre is celebrating their 44th season and has given birth to a 3-show-per-year Jazz Series. Velvet Caravan is their 2nd show of this season. On July 28th at 3pm, Maggie Worsdale and the Sweet Whiskey band will be performing Jazz Meets The Beatles.