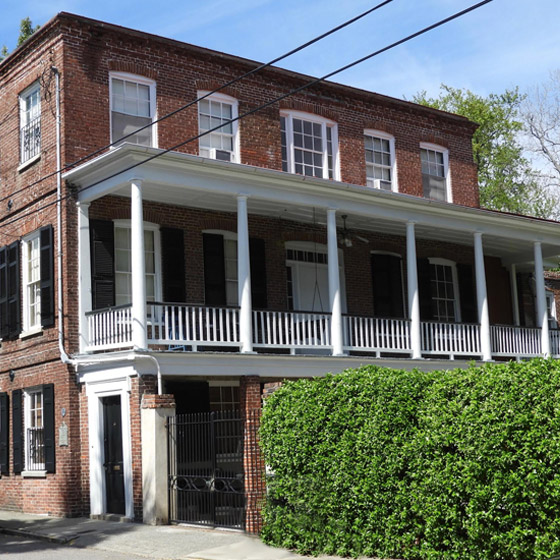 Written by Amelia Whaley. 09 April 2018 Posted in Diary of a Charleston Tour Guide

The Chazal family purchased the land at 66 Anson Street in 1823 for $1.00. Walking by this property today, I believe we would all agree that the Chazals got a great deal! Of course, the house still had to be built and was finally constructed in 1839. Perhaps the family felt it was a good time to build with all the surrounding construction after the fire of 1838.

On the other hand, the Charlestonians experienced an influx of French-speaking refugees from this violent and bloody slave uprising, probably hearing many personal terrifying accounts of the events. The white community in Charleston had been outnumbered by the slaves for years, and with the influx of refugees, they were suddenly faced with the possibility of their deepest fears. If an uprising could happen there, could it happen in Charleston?

By 1839, refugees such as the Chazals were part of the community, and Elizabeth Chazal, a widow with two grown sons, built the three-story structure of red Philadelphia brick at 66 Anson. Elizabeth's receipt book still exists with the records of construction. Her deceased husband Jean Pierre Chazal had captained a small ship for the young United States, and was responsible for capturing several British vessels in the War of 1812.

Their son Dr. John Phillip Chazal inherited 66 Anson. For several years he served as the dean of the Medical College of South Carolina. Dr. Chazal is also listed as one of the doctors in Charleston who served the populace immediately following the earthquake of 1886. Here we have another example of the early Ansonborough families in service to their community.

Next week we'll continue our exploration of Ansonborough.